The Beer Bazaar, a hot spot in Shuk HaCarmel 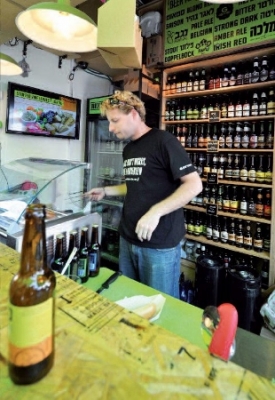 Truth be told, wine is my beverage of choice, but there are times when I can be spotted with another libation in my hand. It's not that unusual to see me drinking an ice cold beer, whether it's in Tel Aviv at one of Florentine's strip of bars, at the annual Beer Festival in Jerusalem, or at Eli's Pub in Haifa on Monday nights when musicians from around the country gather for a no-cover jam session. During Israel's long Mediterranean summers, there are times when an ice cold beer seems ideal.

At a recent beer tasting, I sampled some of the hundreds of imported beers you can choose in Israel, whether you want a Czech pilsner, an Irish stout, or one of the Indian pale ales that have been cropping up.

Yet, since 2006 with the opening up of the Dancing Camel in Tel Aviv, Israel has also had a surge in local microbreweries offering traditional stouts, ales, and lagers.

David Cohen, an American, started the craze with his first bar and brewery in Tel Aviv's Montefiore neighborhood and, more recently, at a second location in Florentine. Jem's, another American creation, opened a popular microbrewery and pub in Petah Tikvah with a satellite bar in Raanana. Dozens of other microbreweries have sprung up, mostly selling through shops, bars and restaurants but it's often challenging to find a great selection of all the Israeli microbrews at any one place.

A new spot in Tel Aviv has become a popular oasis for tour guides, locals, and those who just happen to pass by. Located in the Shuk HaCarmel on the corner of Rambam Street and the shuk's main alleyway, the Beer Bazaar offers the largest selection of Israeli cold beers available at any one bar and, since almost all the beers are sold by the bottle, you can take them home if you choose. The bar opened this year and already has a reliable stream of regulars who occupy its ten bar seats at the modest but welcoming kiosk within crawling distance of all the fresh food vendors and street fare at the White City's flavor-flowing marketplace. Even with only ten seats, they pack in a crowd, as they set up extra cocktail tables on Friday afternoons, a popular time in Tel Aviv for locals to throw back a few drinks. The Beer Bazaar is not merely a tap and bottle dispensary. It's a friendly hangout typically staffed by one of its two owners, Lior Weiss and Yuval Reznikovich.

Lior and Yuval met in Haifa when they both worked at the now defunct Dinner Rush. These guys aren't typical Israeli bartenders. They both have college degrees that could have landed them elsewhere. Lior studied to be a civil engineer at the Technion and Yuval studied political science and business. They both developed a liking and curiosity for local Israeli microbrews and saw the shuk's steady stream of foot traffic as a good base for serving their favorites.

With over 90 beers from dozens of Israeli microbreweries, there's something for everyone who likes beer and wants to try one they can't find elsewhere. Since many Israeli microbrews are sold close to the breweries, it may be more difficult to find a Jerusalem brew like Shapiro's Stout in Tel Aviv, so a central location to sample Israeli beers is a nice way to drink your way around the country without spending hours on the road. You can drink Bazelet from the Golan or some passion fruit infused brew from the Negev without leaving the same barstool. All bottles at the bar cost NIS 27, a fair price compared to other local bars.

They also serve two drafts on tap featuring a house brew made off-premises and a different keg each month from Jem's. Their drafts cost NIS 22 for a third of a liter (about 12 oz.) and NIS 27 for half a liter (about 16oz.). For NIS 88 a great deal is available - six packs to go with any mix of the six beers they have so you can just go to the fridge the next time you want some variety and pop open a beer while watching a game at home, or take some with you on your next trek to the beach.

Near the Beer Bazaar there are countless vendors of street food,, like falafel in a pita or grilled meat sandwiches,, but the Beer Bazaar also offers a nice selection of hot or cold tapas and traditional beer fare. Their chicken sausage is a little spicy, yet not alarming. I tried it served in a bun with onions, ketchup, mustard, and mayo. Freshly cooked, it's a filling treat and a perfect match for beer. All that was missing was a baseball game, but people-watching at Shuk HaCarmel is an engaging alternative or you can chat with Lior and Yuval, great beer mavens, if you want a lesson and not just a good time.

Whether you stop in for a meal, to show a friend a new hot spot in Tel Aviv, or just to unwind over a beer or three, the Beer Bazaar is a great escape on any afternoon. They're open from 10:00 to 19:30 when the shuk and local shops promise them traffic. But if you have a group, they've thrown their share of parties, whether you're in the mood for an Israeli smoked beer, a hoppy pale ale or a crisp wheat beer. If you want to sing "One Hundred Bottles of Beer on the Wall", remember they have closer to ninety, but after a few brews you'd probably lose count anyway.

David Rhodes has written hundreds of articles about Israeli wines and beers and can be reached at Israeliwineguy.com