In Search of Louis Godschalk 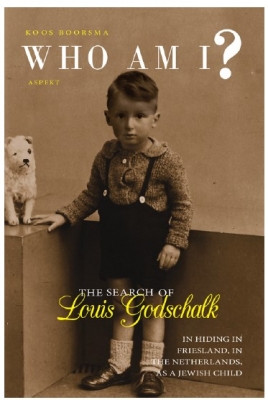 As the Holocaust grows ever more distant in years, the number of those who remember it personally becomes fewer. All the more important, then, that the memories and testimony of survivors be recorded and read, while they are still alive.

'Who Am I? In Search of Louis Godschalk" is one such story. Louis Godschalk, a small boy of 18 months, is a "Hidden Child", given up by his parents in Holland in 1943 in the hopes that he will survive. He does; they do not. One can only imagine the anguish and grief felt by his parents and the distress of the child, removed from his loving parents and passed from one hiding place to another until taken in by a warm-hearted family, only to experience rejection by one foster parent later on.

The book is well-named. Starting life as Louis Godschalk (called Lockie by his parents), he was renamed Gerrit by the Resistance member who sought a foster home for him, then he became a member of the Oosterkamp family and after that, the foster son of Hennie Oosterkamp, who married Feike Rienstra. At the age of 13, he learned to his shock that he was Jewish and not Dutch Orthodox Calvinistic, and that his real name was Louis Godschalk.

Indeed, who was he? He relates that he was confused, unhappy and uncertain of his identity. "When I was told that I was Jewish, that was an extremely nasty burden. I was terrified to be a Jew. For years this caused a trauma with identity and loyalty problems. I ended up in a non-awakening nightmare."

It was as if he were in hiding again in his own inner world. "I was nervous and afraid when I would be murdered, because my Jewish family were murdered because of being Jews. When would I, a Jew, be murdered?"

The question is, why was he not reunited with the members of his family who had remained alive? Louis has strong feelings about this. The decision to leave him with his foster parents was taken by the OPK, the Committee for War Foster Children, whose members were mostly non-Jewish. In July 1948, the District Court of Amsterdam appointed Feike Rienstra as guardian. All might have been well if Rienstra was a good guardian, but he was not, although his wife "Mama" was loving. Rienstra begrudged the attention his wife gave to Louis and belittled him.

After finishing school, Louis studied at a professional school for the retail trade and undertook his required army service. A rabbi in the army arranged for him to learn more about the Jewish faith. He met Ivonne, fell in love and in 1964 they were married. He also visited Israel, the first of many visits. Professionally, he was successful, starting a chain of retail fashion shops.

In 1981, they came to live in Israel.Louis trained as a tour guide, catering to visitors from Holland and was able to repay, to some extent, his foster mother for her love and care by arranging for a medal of honor from Yad Vashem as a "Righteous among the Nations" and Honorary Citizenship of the State of Israel.

Of course, Louis suffered as a result of his many trials. Yet, as he writes, "I did not turn into a bitter person, only seeking vengeance."

"This is how, I existentially rose up from the Shoah."

Although the story is memorable and captures the voice and the personality of Louis Godschalk, the text of this book sorely needs editing.

Nevertheless, these mistakes do not detract from Louis' recollections; a story of courage, hope and survival. It should be read.