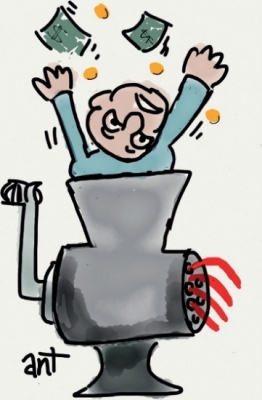 The 2014 U.S. and Israeli tax-filing season has commenced. The Internal Revenue Service is still conducting thousands of audits of both current and prior years' tax returns. Israel also changed its tax regime on foreign (non-Israeli) income in 2003 in addition to their regular tax on Israeli source income. As such, it is imperative that you familiarize yourselves with certain concepts regarding both U.S. and Israeli income tax law and how they may affect your personal situation.

Proper tax planning and minimization of your taxes requires an analysis of many important issues, including the interplay between the U.S. and Israeli foreign income tax credit rules, the foreign earned income exclusion rules, and also how the applicable provisions of the U.S. - Israel income tax treaty affects you. Delineated below are some areas of the current law, which may impact upon your U.S. and Israeli tax return filings due in 2014.

Please note that under the U.S. child credit rules, you may still be eligible to receive – FREE - from the U.S. Treasury, up to $1000 per child per year.

Under the Bank Secrecy Act, a Foreign Bank Account Report (FBAR) must be e-filed annually with the U.S. Treasury, if the following details apply:

ii) The aggregate value of all foreign financial accounts exceeds $10,000 or the equivalent in foreign currency (e.g. NIS 35,000) at any time during the calendar year.

iii) Foreign financial accounts include, but are not limited to, both checking and saving accounts, Israeli pensions, brokerage accounts, mutual funds and unit trusts.

Form 8938 (Statement of Foreign Financial Assets) must be filed in addition to the FBAR with your income tax return, if you live in Israel (or abroad) and

All FBARS must now be e-filed. Paper filings of form 90-22.1 are no longer valid.

In recognition that some U.S. citizens living abroad have failed to file U.S. Federal income tax returns and foreign bank account reports (FBAR), the IRS has designed a streamlined procedure to allow taxpayers to enter the IRS tax filing system. Many factors and requirements apply, but primarily this procedure is available for U.S. taxpayers who have resided outside the U.S. since January 1, 2009 and have not filed U.S. income tax returns during that period. Among the strict requirements for the streamlined process are that three years of income tax returns and six years of FBARs need to be filed, and your tax liability must not exceed $1,500 per return. The IRS will expedite the review process and may not assess penalties for taxpayers filing under this procedure.

A foreign tax credit may be used on taxes generated from income earned in a foreign country such as Israel. Conversely, Israel will also recognize taxes paid to the U.S. and apply them as a credit against your Israeli tax liability.

The U.S. - Israel Income Tax Treaty states that U.S. citizens who are Israeli residents are eligible to exclude U.S. Social Security benefits from their adjusted gross income. This provision may result in substantial tax savings. If you have included your social security income in the past, you need to submit your amended tax returns (up to three years retroactively) so as to potentially receive large refunds.

The foreign earned income exclusion has been adjusted for inflation and has increased to $97,600 per taxpayer. As such, married taxpayers filing jointly, who meet certain requirements, may potentially exclude up to $195,200 of foreign earned income per tax return. However, one spouse may not utilize the unused portion of the exclusion of the other spouse. By electing the exclusion you may preclude eligibility for the U.S. Child Credit. This exclusion applies only to work or self-employment income and does NOT apply to other passive income such as pension, investment income, rental or any other non-earned income.

Rates on long term capital gains (whether derived in the U.S., in Israel or in another country) generally apply to assets held for more than one year. For single taxpayers with taxable income under $36,900 and for taxpayers filing jointly with taxable income under $73,800, a zero percent long term capital gains and qualified dividends rate will apply. Capital losses are still fully deductible against capital gains, and any capital losses in excess of capital gains may offset up to $3,000 of ordinary income. Net capital losses in excess of $3,000 may be carried over indefinitely to future years. A Medicare surtax of 3.8% has been imposed on investment income for high income earners. Israeli capital gains tax rules are significantly different from the U.S. capital gains tax rules and a tax advisor should be consulted in this regard.

If applicable, $1,000 per eligible child may be available to offset any potential U.S. income tax liability or refunded. Taxpayers must have reportable earned income from wages (i.e. Israeli Form 106 or similar foreign wage slip), or self-employment income in excess of $3,000. The earned income of both husband and wife can be combined even if one spouse is not a U.S. citizen. The non-citizen spouse requires a U.S. tax identification number (TIN), which can be acquired by filing U.S. Tax Form W-7. Children must be U.S. citizens aged 16 and below and must possess a U.S. Social Security number. Maximizing the child credit can be complicated since there are many factors to consider. In addition, the IRS has been conducting income tax audits which may require verification of income and other information. Amended returns may be filed back to the tax year 2010 in order to claim the child credit. (2010 amended returns must generally be filed by April 15, 2014).

The gifting limit per spouse of $14,000 annually to each eligible recipient includes children and grandchildren. This continues to be an excellent way to potentially reduce the value of your U.S. taxable estate as well as future U.S. estate income taxes. There is an inflation-adjusted exemption of $5,340,000 on U.S. estates. Please consult your tax advisor for more details regarding your estate planning and writing a personal will.

Refunds may be available for taxpayers who may be unnecessarily filing resident U.S. State income tax returns after they have moved to Israel. Maintaining a bank account, brokerage account or driver's license in a particular state, does not automatically necessitate a tax filing in that state. However, if you have real estate, maintain a business, commute to and work in a particular State, or have any other activity considered a nexus (strong connection) to a State, you would generally only file a non-resident income tax return in that State.

Standard Deduction amounts are: Single or Married Filing separately - $6,100; Married Filing Jointly - $12,200; Head of Household - $8,950. Taxpayers over the age of 65 may claim an additional deduction of $1,200 each, if married, or $1,500 if single. Taxpayers with qualifying deductions in excess of these amounts may itemize their deductions. Bank mortgage interest, real estate tax (Israeli Arnona), Israeli income taxes, and certain charitable contributions paid to Israeli sources may qualify as itemized deductions. Phase out of itemized deductions will apply if income exceeds $300,000 (filing joint) and $250,000 (filing single).

A personal exemption of $3,900 per person is available for each individual listed on the tax return. A U.S. citizen may only be claimed as an exemption once during each tax year. In some cases, grandparents may claim their grandchildren as exemptions on their income tax returns if they provided at least half the support of the grandchild, and if the grandchild lived with the grandparent.

In order to qualify for future U.S. Social Security retirement benefits, one must pay into social security a minimum of 40 quarters (credits). These credits can be earned even while residing in Israel. One can accrue a maximum of 4 quarters per year by earning in excess of $5,500 annually. This is primarily accomplished by:

i) Being self-employed in Israel and reporting Israeli self-employment income on one's U.S. income tax return,

ii) Working in Israel for a U.S. entity and receiving a Form W-2 (employee) or Form 1099 (independent contractor),

Automatic extensions are available until June 16, 2014 for taxpayers who reside outside of the U.S. If there is a balance due, interest will be accrued from April 15, 2014 while penalties will begin to accrue after June 16, 2014. Filing an extension will extend the time to file until October 15, 2014. It is strongly recommended that taxpayers who owe income tax but do not file by June 16th should make a payment with their extension. For the upcoming year, it is imperative that taxpayers pay estimated taxes on a timely basis in order to avoid underpayment of estimated tax penalties. Electronic payments to the IRS using the Electronic Federal Tax Payment System (EFTPS) via withdrawal from one's U.S. bank account can be set up.

Within 60 days of a distribution from a retirement plan, a taxpayer can roll over the distribution to another retirement plan tax free. If the 60 days have elapsed after a distribution has not been rolled over, the taxpayer is required to pay tax at ordinary income tax rates. Once you reach age 70 1/2, you generally have to begin to withdraw funds from traditional IRAs on an annual basis and to pay the required income tax. The amount of the RMD is calculated by using IRS life expectancy tables. Your pension advisor should be contacted in this regard.

An early IRA distribution may be made without being subject to the 10% early withdrawal penalty provided the funds are used to purchase a first home. The distribution amount is limited to $10,000 per taxpayer and/or spouse from each individual's account. The early withdrawal penalty will also not apply in additional circumstances such as medical premium payments for the unemployed or higher educational expenses.

The American Opportunity credit can be claimed for qualified tuition and related expenses for any of the first four years of post-secondary education. The credit is up to $2,500 for those paying $4,000 or more in qualifying expenses for an eligible student. Forty percent (40%) of the credit is refundable, which allows a taxpayer to receive up to $1,000 cash back for each eligible student claimed on the tax return, even if no income tax is due. You cannot claim the credit and the tuition and fees deduction for the same student. The credit is generally available for U.S. universities and for certain foreign universities. The credit begins to phase out at $80,000 for taxpayers filing singly or $160,000 for taxpayers filing jointly. There may be additional credits or deductions available for higher education expenses even in non-eligible institutions, which may offset your tax liability.

Corporations may be excellent tax planning vehicles, especially for taxpayers working outside Israel and in the light of Israeli tax reform. "C" Corporation tax rates are 15% on taxable income up to $50,000 - 25% from $50,001 - $75,000 and 34% from $75,001 - $100,000, with higher rates for higher taxable incomes. "S" Corporations, Limited Liability Companies ("LLC's") and certain Trusts are called pass-thru entities. The pro-rata share of the entity's income must be reported on the taxpayer's personal income tax return and is taxed at the individual's personal income tax bracket.

If you have a foreign corporation, you may be required to file form 5471 (Information Return of U.S. Persons with Respect to Certain Foreign Corporations) with your tax return.