Some folks collect coins, stamps, matchboxes, postcards, dolls, teddy bears, model cars, planes and a myriad of other items that can usually be kept at home or stashed away in a garden shed or garage.

However, Israeli Erez Milshtein's collection of real McCoy tractors and other agricultural equipment comes in all shapes, sizes and colors and of varying veteran status.The scores of red, green, blue, orange and yellow, retired-from-active-duty metallic workhorses are nowadays resting side by side, all spruced up and in full working order.

They stand, like proud sentinels of the past, spread out neatly over an enormous footage of floor space in a huge hangar-like building, dedicated to their illustrious rich ploughing and reaping past. The museum is appropriately situated in the center of lush farmland, surrounded by orchards at Milshtein's home in Moshav Ein Vered in the Sharon Valley.

Growing up in Caerphilly, South Wales, in an area surrounded by mountains, sheep and working farms, and throughout this writer's 50 years living in a kibbutz – 15 of them working in a 350‑head dairy farm – a lifetime 'thing' about tractors developed. With five kibbutz-born children growing up in the 1970s and 1980s, a bumpy tractor ride with their dad at the wheel was always something they, and their mother by the way, eagerly sought of an afternoon.

When the opportunity was presented to visit Milshtein's museum with a group of older members of Mishmar HaEmek, this writer was delighted. Now what could be better?Not only to visit the museum, a long time on my things-to-do list, but to do so with retired members of our kibbutz community, for whom the exhibition would be a true walk back into their mostly agricultural working pasts.

Even before arrival at Ein Vered, they were already avidly reminiscing about their decades of ploughing fields, sowing seeds, harvesting the results of their hard labor whilst operating somewhat ancient to modern tractors and other heavy agricultural machinery, toiling hours out in the midday sun in the orchards, chicken and dairy farms of the almost 100-year-old kibbutz.

Most discussions began with someone asking "Do you remember …."Ah, true historical music to one's ears. Those recollections alone would have filled a book, never mind an article.

Erez Milshtein is one of the best-known collectors of tractors and agricultural equipment in Israel.The Ein Vered collection became a registered not for profit association in 2003 and was formerly known as The Tractor Collection; History of Agricultural Mechanization in the Land of Israel.The association's goal was to operate, maintain and establish a museum, and carry out activities for the acquisition, maintenance and display of agricultural tractors, equipment and tools. Milshtein and his colleagues have certainly fulfilled, and continue to carry out, these aims and objectives.

Upon entering the historical world of tractors and agricultural equipment, visitors are bowled over by the sheer scale of the exhibited items as they stand in rows, silent witnesses to, and in honor of, the development of machinery that helped the Zionist pioneers – human workhorses – turn swamps into arable farmland and make the desert bloom.

Milshtein's passion and enthusiasm, coupled with his incredible vast knowledge of the history of each item – many of which were rescued from disused orchards and rubbish dumps, or were found slowly rotting under piles of junk in disintegrating barns of kibbutzim and moshavim – are truly overwhelming.

As Milshtein led the group of old farm hands from exhibit to exhibit, explaining where, how and when each one was found and lovingly restored by him and his dedicated band of volunteer mechanics, electricians, metalworkers and more, the Jezreel Valley kibbutz visitors also regaled him with their own tales of yore. A great deal of friendly banter ensued – new stories being soaked up by Milshtein like water in a sponge. 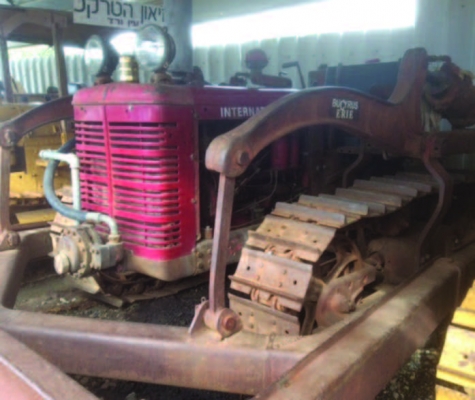 What a beast . . . the Bucyrus TD9 Tractor-Bulldozer

Apart from the tractors, wooden harvesting and threshing equipment and other items, more buildings contain collections of old cameras, clocks, cooking utensils and items that would have been found among the basic tools for survival of the brave or possibly foolhardy pioneers, ill-equipped for the harsh conditions, as they drained swamps and planted millions of orchards and forests throughout the land.

Not only have Milshtein and his highly professional team of volunteers rescued and returned to working order all the above-mentioned and far more, but one particular piece of huge, cumbersome looking and far from attractive piece of machinery caught this writer's eye.This was a Bucyrus TD9 bulldozer, a truly ominous piece of non-too attractive machinery. There is an astounding story behind this particular Bucyrus that is absolutely riveting.

A sign swinging on the metal bars holding up the tin roof under which it stands in an outer courtyard, tells an astonishing, phenomenal tale, and one almost feels one should bow down in front of it on completion of reading the inscription and hearing more from Milshtein himself, as he proudly stands in front of this gigantic, powerful – in more ways than one – piece of machinery.

"The Bucyrus TD9 bulldozer was one of the tractors rescued from a ship that sank in Manila during World War II.It was purchased from the surplus of the American army, and it was decided to use it to fortify the settlements in the western Negev. In 1947, the tractor worked on the Yad Mordechai fortifications and afterwards at Gvaram, Niram and Nirim in the south.The fortifications proved themselves very effective.Yad Mordechai held off the Egyptian army for a number of critical days and the Egyptians refrained from attacking Gvaram and Niram.Similar tractors participated in the Burma road breakthrough."

Apparently, the Bucyrus also participated in the marking out of the 1949 Armistice Line, commonly known as the Green Line, a fence marked by deep ditches along the divide between the State of Israel and her Arab neighbors.

Waiting in the wings of the seemingly unending collection of barn-like buildings around the main building are all sorts of rescued wrecks from the past, still to be returned to their former glory for future visitors to the museum to admire. Among them are a number of remains of vehicles that participated in the 1948 battle for Jerusalem, and a British-built Humber saloon, brought to the Middle East during the British Mandate period.

The Ein Vered Museum will remain on this writer's to-do list, as a second visit is totally necessary to absorb and appreciate even more the incredible effort and visual results achieved by Erez Milshtein and his band of mechanics, electricians and history buffs, to whom we should be so grateful for maintaining the past for the benefit of future generations.