The Papaya in Israel 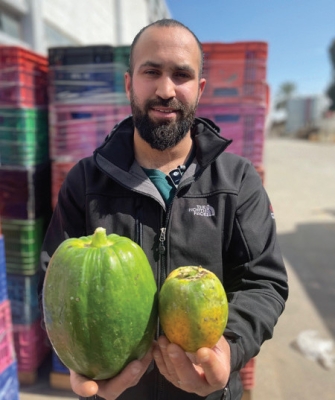 The pawpaw or papaya is relatively new in Israel, having made its debut just fifteen or so years ago. It is mostly used in its green near ripe form as a special ingredient in salads and then mostly by restaurants who order it direct from the producers. Its availability in grocery shops is somewhat patchy as I discovered on my recent trawl of the local supermarkets where it is overshadowed by other exotic options such as the mango.

That could be about to change but much depends on the consumer. The good news is that the papaya in Israel is entirely home produced and growers are ready and able to adapt to changing tastes and patterns of demand.

I was initially confused to find small green avocado-shaped papaya on sale alongside large green melon shaped varieties but have since discovered that both these types come off the same tree and are simply harvested earlier or later in the growing season. As for the large, orange-fleshed and yellow-skinned variety, they too come from the same trees but are left until fully ripe and only gathered for sale at the last moment.

A warning: unlike many other fruit and vegetables, papaya cannot be harvested first and ripened later. Once removed from the tree, the fruit will eventually turn yellow but it will also develop black spots and on the inside will turn mushy. The fully ripe, orange-colored fruit thus has a short shelf life which makes it difficult for growers and grocers to plan ahead in a market where demand is unpredictable.

To combat this, the ripe papaya is often sold through online shops, allowing the yellow, fully mature fruit to be harvested as and when the orders come through.

In Israel, the trees resemble those of my childhood. They are small and prolific, bearing huge clusters of fruit. They are grown under cover in greenhouses like the one at Moshav Hadar Am near Netanya (pictured). To overcome the problem of waiting seven years to discover which tree is which, farmers use grafts, with female trees predominating. A typical papaya farm will have 300 to 400 female trees as well as a small reservoir of around 6 male trees to pollinate them.

There are papaya plantations in a variety of locations all around the country, each one with fruit at a slightly different stage of maturity. As a result, papaya at various stages of maturity are available from somewhere whenever and wherever the demand arises.

For those anxious to rediscover the tastes of their childhood, I recommend the online shop run by Yuval Helman who lives in Zoran. He buys his fruit from the nearby Moshav Hadar Am and is a mine of information. In addition to selling papaya, he grows and sells other specialist produce and while his main clients are restaurants he is happy to deliver to homes across the country.

To find out more go to: www.alehonline.co.il.