The Medium is the Messenger 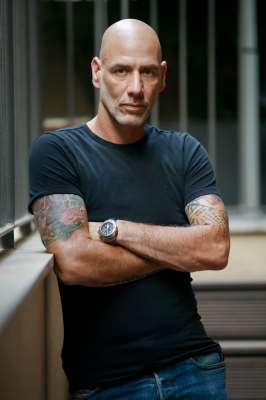 I interviewed Ziv Koren, one of Israel's foremost photojournalists, in his Tel-Aviv office, a site that speaks his aesthetic language: What seems to have been a room in the building's basement has been renovated in a cleanly modernist, functional style. Filling the sitting area are what appeared to me vestiges, of wood and of metal, of workshops from the past two centuries, now used as furnishings. Against one wall we find a bookcase teeming with art books; on the others, surrounding his desk with its multiple computer screens, are classic photographs taken by the medium's pioneers as well as masters of contemporary photojournalism. The photos bear identical wooden frames and hung in a precise geometric pattern. The room speaks to me of a person whose self fully identifies with his chosen profession.

Koren takes photographs that communicate what he perceives the historical moment is all about. Whether on assignment or capturing events he personally and deeply cares about, he always strives to be up front, candid and direct or, in his words: "I'd rather be honest than impressive". After over 30 years and hundreds of thousands of photographs, about 110 exhibitions, 20 books and dozens of awards (e.g., Rendezvous Image Award for Best photo book for "Writing with Light", France (2016), I think we can say that he's managed to do both (examples of Koren's work and personal details are readily found online).

But what does "I'd rather be honest than impressive" mean for a photojournalist with a mission in our digital age? What about the art that, combined with intelligence and sensitivity, makes a photograph great? In other words, what connects the medium to the message? And what, for Koren as a photojournalist, comes first?

Although I didn't ask this question as such, Koren's answer was definitive: "Once I click on the shutter, the technology doesn't matter to me." Although his choice of camera equipment is determined by subject and physical context, he has no special preference for digital or analog. He does admit, though, that digital photography is, after all, better for meeting deadlines and for quickly conveying a photo to its destination, especially with breaking news, and in real time.

But for Koren, it is emotion, the human and humanitarian, that drives his choice of subjects. To be interesting, a photograph's information, he believes, most be infused by the added value of emotion. The scene's visual values become the wellsprings for aesthetic judgments. Even when the scene photographed is dictated by circumstance, the essence of photojournalism. Yet, whoever pays the bill, Koren seeks out whatever object or movement ignites his passions, speaks to his values, makes communication possible between the viewer with the viewed. This approach explains why his photograph of a bombed bus so effectively portrayed the event's horror (1995). Such powerful images, we should recall, invited complaints that Israeli photojournalism had become pornographic.

Koren's commitment to his inner self is sustained by his fidelity to a code of ethics synced to photojournalism's character. This code prohibits manipulation of the photographic content during production and post-production, an accepted and open practice in other photographic genres. It is for this reason that Koren scrupulously controls every aspect of his works' publication and distribution. For the same reasons, he takes extra care to define the photograph's context. Fake news apparently feeds on the failure to define why, when, and how a photograph was taken and reproduced. His invited stills of the Yamam (the special police unit fulfilling military and civilian SWAT duties) in training, innovatively pieced together to create a "film" (2009), the Haitians in their post-earthquake trauma, or the forced removal of the young fanatics peopling the Amona settlement could be read quite differently without that precise documentation.

Koren's latest and most timely book, Breathe לנשום (see photo), like most of his humanitarian projects, was personally initiated. In March 2010 as reports began to roll in of an exploding number of sick people, and before the epidemic was labelled as such, he recognized that this was an historic moment for all humanity. He just had to document it. With the permission of Ichilov Hospital's management, he was given first and exclusive access to the emergency room and Covid wards at the earliest stages of their preparations. His photos, taken over a year and a half, came to cover other hospitals and civilian sites as well. In those photos he captures every emotion, every moment of grace and of love possible as he roamed the hospital dressed like the medical staff in their space suits. Dispersed among its 10 chapters are 13 invited comments written by medical staff, reporters, academics, public figures, and other observers (e.g., Dr. Guy Hooshan, Itai Engel, Prof. Yoram Yovel, former Israeli president Reuven Ruvi Rivlin, Emma Koren). He is now supervising the book's final stages of production, financed through Headstart, a mass funding platform.

In collaboration with Keren Peles, who wrote the accompanying song, a short film, Other Days, ימים אחרים, and using stills selected from among the 250,000 photos taken to reel together another "motion picture". The piece (available on YouTube) was selected to open the 2021 Israel Festival in Jerusalem thanks to the honesty and sensitivity with which it captured the shared trauma.

I consider Ziv Koren's body of work to be a tribute to the messengers who, by delivering honest historic narratives, help us think and feel about life and its living.