The Goodvach family is the sponsor of the ESRA Young Writers Competition in memory of Nellie Goodvach.

Your memory of someone can change the moment they die. Heat dissipates from any argument, and petty frustrations seem nonsensical. We view the deceased with unprecedented objectivity and clarity. This gives me the confidence to say that Mum's essence was that of a teacher. She was never more comfortable than when standing in front of a class or tutoring students and grandchildren one-on-one. She fell in love with her students with a no-nonsense style that was tough on the outside and soft in the center. Mum taught like a Sabra decades before her reluctant but ultimately joyful move to Israel made our family's sponsorship of the ESRA Young Writers Competition such a fitting tribute.

My Hebrew is very poor, so people assume I misspeak when I say that my mother was born in a forest. As unlikely as it sounds to modern ears, being born to partisan parents during the Holocaust was a blessing. She was entrusted to a Polish peasant while her parents took the fight to the Nazis and their collaborators in the Polesie Forest of Belarus. Her father, Henyek, was killed in a partisan raid and her mother, Sarah, survived until liberation by the Russians in 1944. 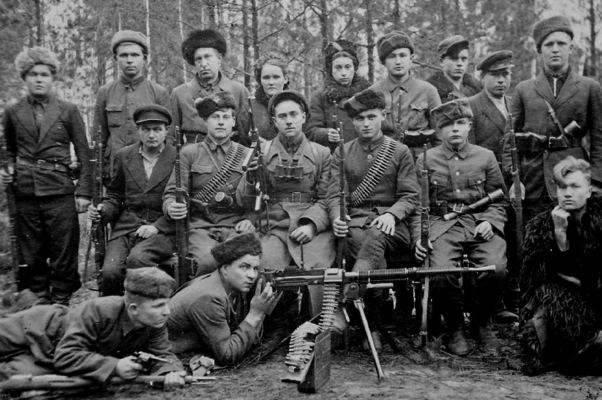 Sarah and Michael Chaim (Henyek) Solowski, Nellie Goodvach's parents (last row, 5th and 6th from the left) with the Nikolia T. Shisha Partisan Unit in Belarus in 1943. Henyek was killed and Nellie was born in the months after this photo was taken. Credit: Ghetto Fighters House

Upon her return to collect Mum, Sarah was told by the peasant, "You are young and can have more children. Leave this one for me." Naturally, Sarah rejected the idea of abandoning the child she bore to her murdered husband and arranged a group of partisans to convince the peasant to hand my mother back. It was only after Mum passed that I considered the lingering impact those three years with the peasant must have had on her. 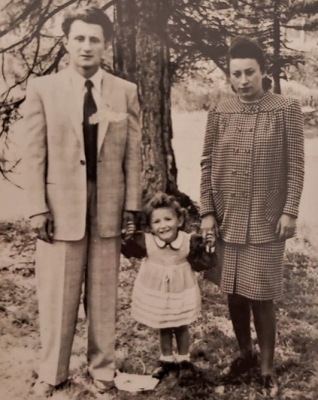 Abraham, Sarah and Nellie Solowski after the war

The team at the Museum and Educational Center, which is located on Highway 4 between Akko and Nahariya, was able to find the photo of my grandparents' partisan unit that is shown in this article. They were also able to show us my grandmother Sarah's Soviet military records.

This is a source of great pride to our family, but also a great regret that we only uncovered this material after Mum's passing in 2020.

Mum's first childhood memories were of her life as a displaced person in Paris and, soon after, watching dolphins chase the boat she travelled on to Australia in 1947, where she had a family sponsor. Mum, her mother and stepfather Abraham (Henyek's brother) lived there for over 60 years. She carried a fierce love of the Jewish people wherever she went and reinforced that with her three children and eight grandchildren, who all now live in Israel.

One wonders whether Mum's childhood experiences influenced her attachment to the children she taught. She became a teacher at 19 and then again at 44, after a gap of 20 years. With her three boys having grown up, she returned to college for retraining with a determination that propelled her back to the classroom. Over the decades she was the teacher her students most fondly remembered. Younger teachers at Beth Rivka Ladies' College also learnt from Mum and credited her with the tips, tricks and wisdom of her old-school approach.

After her professional teaching career ended, Mum's passion to educate continued. She volunteered as a guide at Melbourne's renowned Holocaust Museum. Here, she utilized her decades of experience to guide student groups through the exhibits. Working with mostly non-Jewish school groups, she exposed many to the horrors of the Holocaust for the first time and sensitively transferred lessons of tolerance and defense of the less fortunate to a new generation. The credibility of her own experience added a gravitas to her message that resonated with the students.

It was never Mum's wish to make aliyah but with all three of her children and eight grandchildren already in Israel, she and Dad, Greg Goodvach, decided to make aliyah in their mid-70s. In a lesson to all of us, once she and Dad made their decision, they embraced it with a positivity and enthusiasm that was infectious. They settled in Poleg (South Netanya) and made new groups of friends through involvement in book clubs, poetry clubs and social groups like ESRA.

A source of pride for Mum was that she was able to continue teaching when she and Dad met small groups of children at the local primary school for weekly English conversation sessions that were sponsored by ESRA.

Our family was overwhelmed by students who reached out to us when they heard that Mum passed. Although many of the stories were 30 years old, her students spoke of how their interaction with Mum changed their lives. The recurring refrain was that Mum was one of the first teachers to believe in them, and how that belief was the catalyst for their own self-belief. So simple, yet so powerful.

Through our family's sponsorship of the ESRA Young Writers Competition, it is our wish that students continue to have an opportunity to foster their self-belief. May our Mum's memory be an inspiration and a reminder that we should be on a constant journey to test our capabilities and strive to be the best we can be. The competition has many prizes, and there will be many winners, so that we can encourage as many students as possible to participate.

Mum would not have encouraged us to support a competition in her name. She was not one to seek to glorify for her achievements. But I can imagine a small smile of pride creep into the corner of her lips, knowing that we honored her memory by seeking to inspire children to learn.

No doubt, to those who are now waiting to hear whether they're winners, she would have said, "You gave it a go. That means you're already a winner."

The Goodvach family is the sponsor of the ESRA Young Writers Competition in memory of Nellie Goodvach.

The ESRA Young Writers Competition closed on May 30 and judging is now underway. The competition, held in conjunction with the Ministry of Education, was open to all 9th and 10th graders. Winners will be announced in the next issue of ESRA Magazine, and the First Prize winners' entries will be published in ESRA Magazine.