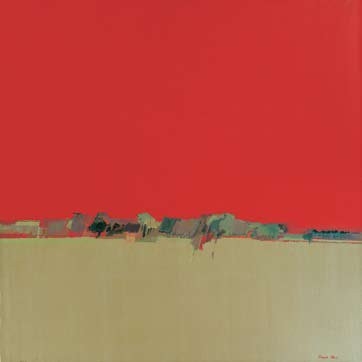 After many years of exhibiting abroad, Steffa Reis—a veteran member of the Israel Painters and Sculptors Association and a longtime resident member of the legendary artists' colony in Zefat (Safed), recently presented a retrospective exhibition entitled "50 Creative Years - Seasons of the Soul", at the Artists' House in Tel Aviv.

The exhibition included 40 works on canvas and paper that demarcate and celebrate the evolving expression and subject matter of Reis' work over the span of 50 years, and range from figurative to abstract, from her evocative landscapes of Israel to her explorations into mixed media and new techniques.

Still brimming with vigor and originality, Steffa Reis is simultaneously launched a splendid retrospective art book that bears the same title as the exhibition and reflects her lifetime of work as an artist.

Born in Berlin, raised in England and influenced by the Zionist youth movement - Habonim, Reis made 'aliyah' with her young family in 1957, and initially settled in Kibbutz Ein Harod in Emek Yizrael. In 1969 she established her first studio and gallery in the artists' colony in Zefat, and soon achieved recognition as a serious Israeli painter. From 1980 on, Reis established a second studio in Tel Aviv where she is now resident. Steffa Reis' deep affinity to Israeli landscapes first took root with the beauty of Emek Yizrael and then took flight through the inspiring vistas of the Galilee.

Over the years, Steffa Reis became a true ambassador of Israeli art, presenting over 50 one-man shows worldwide, and many of her works can be seen in public and private collections.

The recent retrospective exhibition lead visitors into a luminous panorama of an iconic series of landscapes and abstract works representing the changing seasons of Reis' creative life as an artist. As Varda Steinlauf, curator at the Tel Aviv Museum stated: "Steffa Reis' landscapes are full of color. They are refreshing, vital…and full of light. A movement of internal and external landscapes called 'push and pull' and the interplay between the figurative and abstract painting, together excite and stimulate the viewer. The beauty of landscape is her outlet….from which she breaks up original components and reassembles them afresh only to rediscover and capture the inner essence of nature."

Steffa Reis says that if landscape is the prime catalyst for her work, then music is its inner dynamic generating its movement and color. Involved in music all her life, and always accompanied by music in her studio, the expressive force of music has informed Reis' painting, rendering her work with a distinctly lyrical and emotional quality. Reis herself states that her work is frequently called "Experiential Art" in the sense that her creative process is more concerned with the act of experiencing than with external events in themselves. This is a common thread throughout her work and produces that signature vibrancy for which she is so well known.

"In the world of sensory experiences and moments remembered, we create symbols and metaphors so as to mould the language and imagery necessary to express our artistic vision," says Reis. "I enjoy the challenge of different techniques because of the myriad possibilities for the emergence of exciting new ideas."

The retrospective exhibition contains four different thematic and stylistic groupings dating from 1978 to the present. The first is 'Abstract Landscapes', the second is titled 'Small Joys and Calendar Pages', the third concerns itself with 'A Square within a Square and Cyphers', and the last includes oil pastels on paper.

Steffa Reis has an interest in different media - oil, acrylic, oil pastels on paper, mixed media and printing techniques. She has evolved a technique of working on and over pre-existing material or images. From this was born her series of works called 'Calendar Pages and Small Joys', about which she says: "I like the idea of retaining and working on top of other images - their surfaces becoming raw material for me as in a continuum, where nothing is lost, only recycled. New ideas and solutions emanate from the old. It is akin to keeping faith with the past and allowing for rebirth." The result is an explosion of layered color bursting out of the images.

Another daring conceptual theme presented at the exhibition, which Steffa Reis has been exploring since 1966, is the idea of a 'Square within a Square'. Here the canvas takes on maze-like architectural patterns and designs which at times resemble mathematical puzzles. Overall, Reis attributes her odyssey towards what has become her signature style as having to do with her endless curiosity and readiness to meet the challenges of unfamiliar materials and techniques. "It is all part of the excitement of creating," she states with conviction. "I have always gone my own way, with no single commitment to any school of thought in the art world. In my search for an imaginative experiential world, I have fashioned my own vernacular of imagery. On the metaphysical plane I am at one with what I hear and see in nature, music and the human condition. If I have in any way been able to transmit this, I am content."

The exhibition was curated by Aryeh Berkowitz, and opened with an address by Varda Steinlauf who curated Steffa Reis' retrospective art book. Many friends, fellow artists and fans from far flung places throughout Israel attended the festive opening and came to show their appreciation of Reis' achievement and talent.