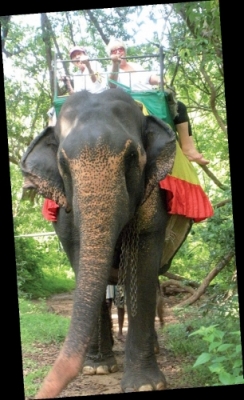 Riding high on an elephant 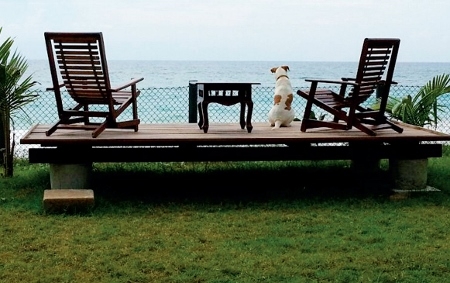 If China was red, Sri Lanka is green. During a two-week visit to this island of green last November, we encountered undulating hills, mountain slopes and valleys covered with blankets of rich, lush green, the brilliance of which we rarely, if ever, see in Israel. Endless tea plantations, their bright green leaves testament to the enticing aroma and taste of a good cuppa, lent truth to the venerable inscription on tea containers, "Made in Ceylon".

Tall, swaying coconut trees abound, whether along the coast or further inland, their graceful, angular trunks leaning forcefully into the breeze, enhancing this picture-postcard tiny paradise. Pungent spice gardens filled with myriad species engaged our senses with familiar fragrances, from vanilla to curry to anise. Fields of tropical fruits were so numerous in their variety as to beggar belief, producing delicious, sweet and juicy papayas, pineapples, mangoes and bananas, which we devoured with gusto. And gigantic indigenous trees provided huge canopies of shade and green, encasing entire city blocks or simply reaching for the sky in the open terrain – a far cry from Israel's man-planted landscapes.

Home to a population of some 21 million Sinhalese, Tamils and other minor ethnicities, Sri Lanka's main religion is Buddhism, the first writings of which were composed on the island. The Portuguese named Sri Lanka when they arrived in 1505, which was transliterated into English as Ceylon while it was a British crown colony. The name Ceylon is still visible around the country, although it was officially changed to Sri Lanka in 1972. 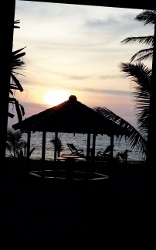 A sea of green, a whisp of spice’

Sri Lanka means "Prosperity of the Land". It is also known as the "Pearl of the Indian Ocean". And indeed it is. Located just southeast of India, lapped by the warm waters of the Indian Ocean, the island is shaped like a teardrop in the sea. Affected by monsoon winds from the Indian Ocean and Bay of Bengal, the central highlands are blessed with an annual rainfall of up to 2500 mm (98.4 inches) per month (nebech!), while the "dry" zones receive 100 mm (4 inches). With 103 rivers criss-crossing the island (another nebech), it is not difficult to understand why Sri Lanka is a veritable Garden of Eden with tea, coffee, gemstones, coconuts, rubber and the native cinnamon as key exports.

Sri Lanka is recognized as one of the 25 biodiversity hotspots in the world, a fact that was apparent everywhere we travelled. Although relatively small in size (albeit three times the size of Israel), it boasts the highest biodiversity in Asia, with 24 wildlife reserves including the Asian elephant, leopards, bears and many other animals. Taking a 45-minute elephant ride (an exhilarating experience and definitely recommended for all ages) was one of several highlights of our tour, made even more exciting against the backdrop of Sigiriya or Lion Rock, a massive column of rock nearly 200 meters high, of historical and archeological significance.

In sharp contrast to Israel, a fascinating and admirable part of their culture is their reverence for all 4-legged creatures which, in addition to the elephant, range from dogs to cows, which are plentiful. At any point, anywhere in the country, you may see cows ambling along the road, dogs lying or walking around, an iguana slithering across the road, or even the odd rooster fluttering to get to the other side – and you can be sure that each and every vehicle, large or small, will stop to ensure the animal's safe passage.

Another curiosity was the multitude of massive billboards of the Sri Lankan President's figure and face wherever we went, always strategically placed and at a height for maximum visibility. There he stood, in a glorious white galabia with a red garland, at the approach to every city or town, along the wayside, near points of interest, his countenance smiling pontifically down upon his flock, with large letters declaring that he has only the people's best interests at heart. We were told that corruption is rife.

We had several options of airline routes to reach Sri Lanka, but the quickest was via Amman with Royal Jordanian Airlines and from there via Al Ain in the Emirates to Colombo. The routing alone was significant for the fact that prior to 1995 and the peace agreement with Jordan it would not have been possible for any Israeli to do this. The flight to Amman was so quick that no sooner had the plane taken off than it was preparing to land. Walking around the airport was in itself an experience, and the fact that they too need to carry out security screening did not escape us. The stop in the Emirates hardly registered, as it was only to refuel, for which the plane remained near the landing spot.

The initial impression upon leaving the airport in Colombo was the hectic hustle and bustle, endless vehicles vying for space and the intense heat and humidity. Once out of the city, main roads consisted of single lanes, with routes twisting and turning so frequently that car-sickness became a constant travel companion. And forget getting anywhere fast; it can take two hours to travel 60 km. However, progress is being made. There is one real highway in the country, finished only recently, connecting the south-west coast to Colombo.

For the first week of our trip, we rented a private car and driver, which was both reasonable in price and a very convenient way to get from place to place. Our first stop was an elephant sanctuary where we were treated to elephants' mealtime and watched the animals from just a meter or two away while they munched on branches and leaves. They were seemingly oblivious of us, and clearly more interested in the job at hand. Shortly after, they were herded down to the nearby river for their daily 2-hour swim/bath/relax. As they made their way down the lane lined with tourist shops and hotels to the river, they dropped masses of dung, which were diligently collected and carted off to the factories which produce an astounding variety of "elephant dung products", one of which, a notebook, we happily purchased.

Another experience was a ride on a cart pulled by a bullock, an incredibly strong beast which successfully pulled us through mud going uphill. A visit to an elephant safari at dusk was memorable for our encounter with a seemingly agitated large female, who, by raising her tail, warded off approaching jeeps; we hightailed it out of there ourselves.

An impromptu visit to a baby elephant orphanage turned out to be a special treat. The youngsters remain there until they are returned to the wild. The staff refrains from touching them because if they have a human smell on them, elephants in the wild reject and attack them, so they are fed milk by a system of funnels and tubes, while rods are used to gently prod them on their way.

The middle of the island is hilly and again, so green. Rows and rows of tea plantations cascade down the mountains in orderly fashion. We stopped at a tea factory and learnt about the various cuts of tea that constitute white, green and black teas, as well as the process of drying and packaging. And we got to taste the results – for tea lovers, a marvel of different tastes for every palate. It was delicious. Of course, we bought some to take home.

Sri Lanka is home to the Sinharaja Rain Forest, a world heritage site. While our visit to this mountainous reserve was impressive, the ascent was hair-raising. The road, if one can call it that, was a treacherous series of sharp S-bends up the steep incline that never seemed to end. Added to this, it was raining with such force and ferocity that visibility was blurred. Water cascaded down the narrow and winding road that resembled a flowing stream. At one point, we had to back up three times until the driver could make a turn. But we arrived safe and sound, and the following morning, we walked along that same road now dry, calm and peaceful. The lodge guide discouraged us from entering the rainforest itself because it was so thick and entangled, and home to creepy leeches (not for us).

Our second week was pure rest and relaxation at the Max Wadiya, a boutique hotel on the beach at Ambalangoda, a small town on the southwest coast of the island, where masks are made for the many ceremonies held by the locals. The hotel, owned by Rachel's brother and sister-in-law, was a veritable paradise, beautifully landscaped and set within tall coconut palms overlooking the Indian Ocean. We shopped for mementoes in nearby Hikkaduwo, and ate a variety of island delicacies from curd and treacle in the morning, to curried vegetables and rice in the evening. We also enjoyed a river cruise in the mangroves, and a demonstration of cinnamon production. A morning on a whale-watching boat was the least successful of our many adventures. 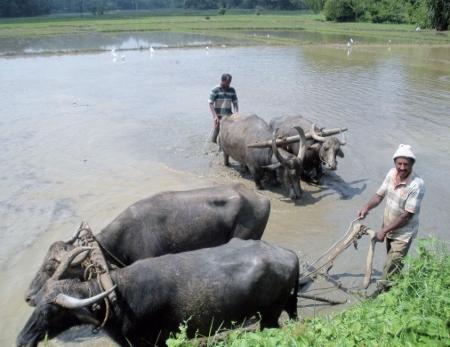 The 2004 Asian tsunami killed over 35,000 people in Sri Lanka. During our week in Ambalangoda, we heard several inhabitants speak of that terrible day, and visited a primitive but heart-wrenching exhibit of photos and memorabilia in a shack at the roadside. They told us how the ocean had pulled back far out to sea before it came thundering and crashing in with monumental force, uprooting everything in its path. All the signs in the museum were handwritten, and the photographic displays haphazardly pinned on boards. This was a place worth seeing if only to share the awful tragedy that befell them. As a point of interest, all guests and staff at the Max Wadiya, including the dog, were saved because the gardener realized what was coming and got everyone onto the roof of the building in time.

Sri Lanka is definitely worth a visit. It is not as expensive as other destinations, and its lack of exploitation is in many ways its greatest asset. We visited stunning temples, sanctuaries, spice and botanical gardens, all spotlessly clean and cared for, despite the general primitiveness of the country. People are friendly and smiling. Many speak English. Prices are there to be challenged. And perhaps best of all, when we said we were from Israel, the smiles just broadened with a shake of the head, "Ahhhh Israel. Sababa"!