There are many military memorial sites throughout Israel, unfortunately, but one of the most impressive and lovingly cared for this writer has visited over the years honors hundreds of Bedouin citizens of Israel who fell in the line of duty whilst serving in the Israel Defense Forces.

Among the 230 Bedouin fallen are a number of IDF personnel who lost their lives whilst carrying out highly dangerous missions outside of Israel's borders Details of their heroic deeds undertaken many years ago are still classified as state secrets. 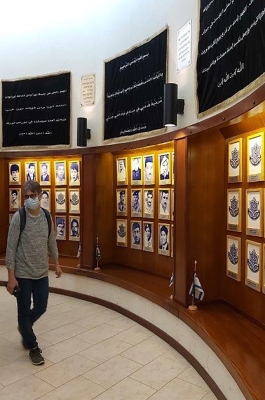 Inaugurated in 1993, on Independence Day, by former Prime Minister Yitzhak Rabin, the Monument to the Bedouin Soldier is situated near the Hamovil Junction in Lower Galilee in close proximity to both Bedouin and other Israeli Arab communities.

Astoundingly impressive with meticulously cared for gardens with quiet, creatively designed corners for families to comfortably sit, reflect and contemplate, embraced by the shared pride of having the name of their loved one etched in stone alongside other members of their tribe, community, and fellow citizens of the State of Israel.

Among the Bedouin who lost their lives serving the country are a number whose burial places remain unknown, one of whom having died during the battle for Safed in the 1948 War of Independence and whose body was hastily buried in a cave by comrades fighting a fierce battle in the rugged terrain full of small and large caves. Sadly, all efforts to trace the fallen soldier's remains have been unsuccessful to this day. 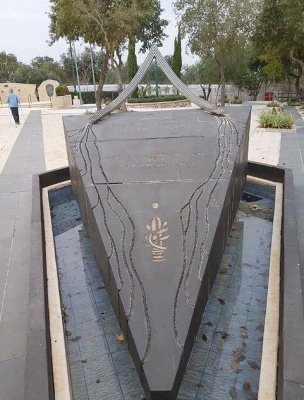 Bedouin monument in the Lower Galilee

Three other IDF Bedouin soldiers whose burial place is unknown were captured in Syria during extremely dangerous missions on behalf of Israel in the 1950s and 1960s. Captured, tried and sentenced to death by hanging, their places of burial still remain unknown. Details of their missions were never released to the general public or their families.

Within the extensive grounds that house the collective recognition of the hundreds of Bedouin who lost their lives serving their country is the Garden of the Broken Heart, an incredibly touching memorial within a memorial dedicated to those whose burial place is not known.

It is created from a collection of natural grey rocks, a few almost eerily human-shaped and seemingly standing with bowed heads and others apparently crouching, hunched over in pain, on the ground alongside. The magnificent small garden boasts a lusciously green, finely-clipped lawn and meticulously, artistically shaped bushes and hedges, and although heart-wrenching is, at the same time, rather soothing.

The entire extensive Monument to the Bedouin Soldier site is stunningly landscaped, meticulously cared for and includes a museum of Bedouin heritage, an archive, a circular gallery where black and white photographs of the fallen are displayed on a backdrop of dark wooden paneling, an auditorium, and an intriguing herb garden where each bed of herbs is not only named, but also has an explanation of the medicinal qualities of the plants.

The upturned helmet in one of the site’s Yizkor memorial walls.

Scores of names are engraved on a number of walls of remembrance, one of which is shaped like a half open scroll, and there is an eternal flame contained in an upturned helmet and another stone- sculpted eternal flame alongside.

Aliza Gross, an Israeli Jewish nurse, is one of leading lights behind the formation of the Memorial to the Bedouin Soldier. Serving in the IDF as a nurse and then stationed in Sinai, Aliza assisted many Bedouin women during difficult births and learned a great deal about their customs and general way of life. Aliza, a powerhouse with a mission that those Bedouin who died serving the State of Israel be honored and never forgotten, lives in the Israeli town of Ramat Ishai in the Jezreel Valley. She joined forces with Musa Kabiya from the nearby Bedouin village of Kabiya, whose late brother, Salach Kabiya, served as an IDF tracker and was killed during an exchange of fire with a group of terrorists in 1984.

"Musa is here every day, the first to arrive and the last to leave," explains Aliza to this writer and a large group of Israeli Jewish pensioners, none of whom had ever visited the impressive memorial and large on-site educational center that is a relatively short journey away from their kibbutz, but somewhat off the beaten track.

Salach was aged just 22 and married with one young son. His wife was pregnant with their second child, a daughter, when he fell in action. The IDF Yizkor website describes Salach as a nature-loving youngster who helped out with the family farm, attended the village junior school and went on to high school in the Druze town of Dalyat HaCarmel, where he discovered a love of poetry, including the works of Bialik, Rachel, and Shaul Tchnernichovsky. He also loved music - that of Umm-Kulthum, and Farid al-Atrash, as well as Israeli Jewish singers Ofra Haza and Zohar Argov.

"Jews and Druze are conscripted at the age of 18 and their fallen soldiers are buried in military cemeteries, but the Bedouin, who volunteer and are not obligated to finish three years of service, are buried – according to their own custom – in the cemetery of the extended family, or hamula as it is known in Arabic," explains Aliza. She and Musa share their vast knowledge of Bedouin history, customs and culture with many groups of Israeli visitors, including university students, high school students and IDF soldiers on educational programs.

Although no fallen Bedouin soldiers are actually buried at the extensive site, there are a number of what appear to be military graves, but in actual fact are individual IDF memorial headstones or "cushions", as Aliza describes them. Aliza and Musa Kabiya, together with other dedicated volunteers, are also heavily involved in helping families of the Bedouin fallen soldiers who need assistance.

In one corner of the site there is a half circle of such headstones and the view from this side of the hilltop, where the Memorial to the Bedouin Soldier is situated, is quite breathtaking. It takes in the shimmering waters of a large, full-to-the-brim reservoir, the extensive area of agricultural fields and olive orchards and, spread across the nearby mountain range, some of the villages from whence came a number of those remembered at the memorial - young men who grew up and were educated in the Lower Galilee region and fell in the line of duty serving in the IDF.