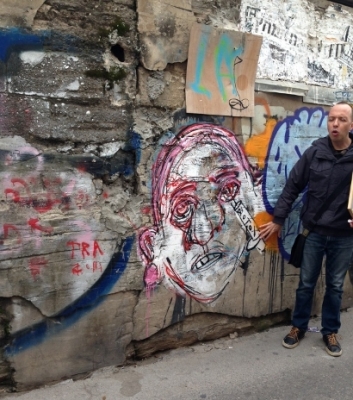 You may have noticed – who doesn't – that central Tel Aviv is awash these days with graffiti. In certain neighborhoods, hardly a shop wall, door, bus stop or garbage can is unadorned by spray painted scribblings. Many people consider these images to be legitimate popular art. Others, such as the shop owners who wake up in the morning to find their premises spray painted, are more likely to call it vandalism.

Graffiti dates back to cave paintings, but aerosol spray-painted messages and images became popular starting in the 70s and have spread all over the world. Today, graffiti, or street art, has become a recognized and popular way for underground artists to express their talents, their social and political messages and sometimes their humor. If you have your doubts about its legitimacy, just consider that Banksy, the famous British wall artist, has had images, presumably with the wall attached, sold at Sotheby's for hundreds of thousands of pounds. Banksy, by the way, came to Israel in 2005 and painted several pictures on the West Bank concrete barrier, without permission of course.

Graffiti is cool – and Tel Aviv, along with Berlin and London, has become a recognized world center for street art.

Guy often guides groups of American young people (many from the Israel Experts educational tour company). I recently joined a group of these college students on a meandering roam through the streets and lanes of Florentine to learn more about the area's street art, which can be spied almost everywhere. The reason it's so ubiquitous, says Guy, is that Florentine, once a rather decrepit neighborhood of workshops and modest dwellings, is undergoing a process of gentrification. There are more than 20 construction sites in this small area right now, which means that the authorities feel it isn't worth their while to crack down on graffiti sprayed on buildings that will soon be knocked down anyway. As a result, street art is blooming. So crowded are the walls that some artists have hired cranes so that they can paint pictures two and three stories up.

Some are easy to miss. Here and there on walls are stuck tiny figures of plastic ducks, or figures of a man in plastic beads. An animal lover has used an image of a cow, with the message, "Free your slaves. Turn to vegetarianism." On the shutters of a shop, Guy points out a painted eggplant, with the letters EPK at the bottom. That's the signature of "Eggplant kid", whose eggplants, a very Israeli image, can be seen here and there in the area. There are also paintings of carrots around, but EPK has commented on his Facebook page that he didn't do them. Presumably, there's a Carrot kid out there somewhere too.

Another local artist is TRA ("art" spelled backwards), who turns out to be a 12 year old boy. His trademark is a syringe filled with Botox about to be injected into a face. Guy explains that TRA is obsessed with appearance and weight, and that a nearby gallery sells pictures of his for $100 each. You can also buy stickers of EPK's eggplants, not to mention cell phone covers with art by Dede, via his internet site – a snip at $15. 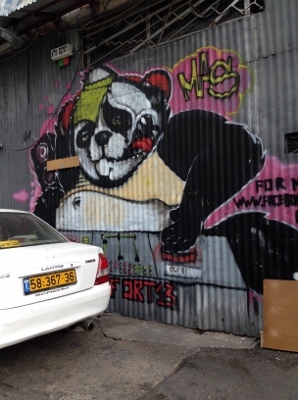 Bearing up ... graffiti of a panda on a corrugated wall in Tel Aviv

Cartoons are popular images. One artist creates cartoonish representations of what he calls "hakufsonim" – the carton people. These are pictures of happy little boxy creatures. Also to be seen are drawings of Max, from "Where the Wild Things Are" and many others, such as a representation of a Jewish cartoon character hugging an Arab cartoon character. Another artist employs raised white dots, indicating a Braille message.

Other artists prefer words, either to express their personal philosophies or political leanings, or just to be poetic or puzzling. On one building, we read "Follow your dream, but don't sleep." What does it mean? Who knows.

Such urban texts become cultural readings and are frequently edited by other artists. For example, one person wrote, in Hebrew, "Jews and Arabs refuse to be enemies." Someone sprayed out a letter from "Yehudim" (Jews), so that the text then read, "Jews and Indians refuse to be enemies." Soon after, someone else put the it back. This kind of collaboration, whether willing or not, isn't unusual. A joint work by street conceptual artists Dede and Wonky Monkey of a bird, together with other images, can be seen on one wall, with the addition of a small sculpture in wool framed by a shoebox, by another artist. "They respect each other's work," says Guy.

Not all street art can be dismissed as trivial. Some, in fact, is impressive by any standards. The Parisian street artist C215, whom Guy describes as very famous, came from France for a few days specifically to paint graffiti relating to the Middle East conflict. The result is an image of an ultra-Orthodox man praying by a road sign in three languages; the sign pointing in one direction to Tel Aviv and in the other, to Jerusalem, referring to the gap between the two.

Other images, edgy, avant garde and innovative, are also obviously the result of much thought and talent by artists who prefer the street to a gallery as a venue. Some of Tel Aviv's serious street artists are known as Klone, Brokenfingers, Knowhope as well as Wonky Monkey and Dede, whose signature is a Band-Aid. Many have internet sites where their work can also be seen.

Even when the images aren't really high art, as Banksy has said, "Graffiti is one of the few tools you have if you have almost nothing. And even if you don't come up with a picture to cure world poverty, you can make someone smile while they're having a piss."

Guy Sharett's website: www.streetwisehebrew.com. One and a half hour tours on Friday cost NIS 80.