Kalia - the Lowest You Can Get Gallery

Tucked snugly into the northwestern corner of the Dead Sea, a few dozen small bullet-riddled concrete buildings have become a most unusual art gallery in an artistic attempt to highlight the Dead Sea's slowly but surely disappearing mineral-rich waters. The derelict, pockmarked buildings at Kalia in the Jordan Valley Rift - originally constructed as a base and center of operations by the Jordanian Army in the 1950s - have become a more than colorful, bellowing artistic cry in the desert conjured up by 30 graffiti artists from Israel and around the world.

The Gallery Minus 430 at Kalia Beach, which is what the long-abandoned buildings slowly crumbling away in the relentless but natural to the region's harsh conditions have become, is aptly named as it is situated an incredible 430 meters below sea level. The artists can rightly describe their work as hanging, or plastered, on and across the walls of the lowest art gallery in the world.

The collection of eye-catching and thought-provoking eclectic artistic works displayed across the decaying walls at Kalia have been created not only to highlight the slow and disastrous shrinking of the Dead Sea, but also bring about serious efforts to save the iconic expanse of mineral-rich waters containing bromide, magnesium, calcium, sulfur and far more.

The majority of the low buildings served as barracks for Jordanian soldiers, shower blocks, garage and other service facilities, whilst a large two-floor building housed the kitchen and dining-room complex. Another large building with a number of floors is situated a short distance from the others and it was here that Jordanian Army officers were billeted.

Israeli tour guide and hi-tech systems analyst Ron Tzur was an officer in the IDF Engineer Corps in the 1980s and served a good portion of his five-year army service in the Jordan Valley Rift. A member of a kibbutz in the Lower Galilee region, he has always felt deeply connected to the land, nature and history of the country of his birth, but describes his relationship with the Jordan Valley Rift as "special".

Standing between the remains of the crumbling former Jordanian Army base, Tzur explains that the artwork first appeared in 2018 when artists from nearby Kibbutz Kalia invited creative, environment-caring activist Israelis to join in the save the sea art project. The paint for the project was donated by the Israeli company Tambour.

Tzur studied for the two-year Israeli tour guide course during the beginning of the Covid-19 pandemic and although he continues to work as an analyst, he welcomes every opportunity to take visitors from abroad, and his fellow Israelis, to places such as Gallery Minus 430 that are well off the beaten track.

"Kalia was established in the late 1920s on the Dead Sea northwestern shore at an area known as Lido Beach," explains Tzur, who prepared an informative pamphlet on the highly, or should one say lowly, open gallery with powerful messages on its dilapidated walls. "Originally built during the British Mandate period as housing for workers of the Palestine Potash Company founded by Moshe Novomeysky, a Jewish engineer from Siberia who brought this industry to the Dead Sea, it was named Kalia - a Hebrew acronym for Kam Letechia Yam HaMelach that literally means 'the Dead Sea has returned to life', yet we are now struggling to keep it from even more drastically shrinking into oblivion." 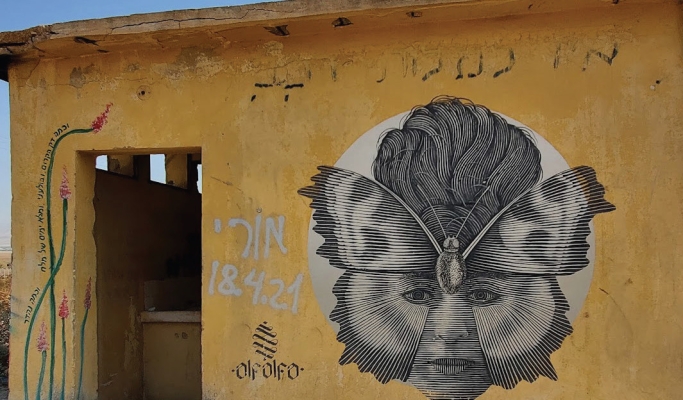 The original Kalia at Lido Beach was evacuated by order of David Ben-Gurion during the 1948 Israel War of Independence with workers and operations transferred to the southern shore of the Dead Sea. The 1920s constructed Kalia site was subsequently destroyed by the Jordanian Arab Legion but resettled as a kibbutz two decades later in 1968 by Israeli soldiers serving in Nachal following the recapture of the Jordan Valley Rift and northern Dead Sea during the 1967 Six Day War.

In the late 1970s, Kibbutz Kalia at the Lido Beach site was disbanded and resettled to a permanent site closer to the famous Qumran Caves nestling in the foothills of the Judean desert a relatively short distance away.

In present times, around 500 people have made Kibbutz Kalia, just a half-hour journey from Jerusalem, their home. One of many successful ventures developed over the years is a thriving guest house with holistic treatments on offer as well as guided tours to the many fascinating sites in the region and, of course, the Kalia Beach facilities.

However, one Kalia venture in the past that did not succeed was a water park built on the shores of the Dead Sea between the last of the buildings of the former Jordanian Army base, which is now the open air art gallery, and the nearby shore. Looming over the rejected, dejected buildings is the large, rusting frame of what was once an enormous water slide and most sought after attraction back in the day.

It seems to be shrugging its rotting, sagging shoulders in the sky at the visitors far down below wandering from building to building viewing the Gallery Minus 430 pictorial pleas for positive intervention to stop further demise of the region.