The Dual Disciplines of David Sharir

My introduction to the creative work of versatile Israeli artist David Sharir was by coincidence.

The expression "never judge a book by its cover" is applicable to buildings as well. Some of the least attractive office buildings in Tel Aviv can hold the most wonderful surprises. One example is the Shalom Meir Tower, or Migdal Shalom, as it is known locally. Situated just off Rothschild Boulevard, Migdal Shalom was erected in 1964 on the site of the former Herzliya Hebrew High School and had the honor at that time of being the tallest building in the Middle East.

Several months ago, before life was disrupted by the current Covid pandemic, I walked through Tel Aviv as I like to do, aimlessly, appreciating the varied and unusual trees, distinctive architecture, discovering still another hidden, flower-laden passageway. I passed Migdal Shalom, as I frequently have, but this time decided to visit the galleries inside. The non-descript foyer on the ground level gave no hint of the walls of magnificent mosaics which faced me.

One wall featured the work of renowned artist and children's author, Nahum Gutman; the other equally majestic wall was done by contemporary well-known Israeli artist and set designer, David Sharir. Both mosaic walls depict Jaffa-Tel Aviv, but it was Sharir's mosaic which captivated me, drawing me into a world of reality and fantasy simultaneously.

Sharir's mosaic covers 80 square meters of wall space and comprises approximately one million glass stones (tessere in Italian) that were molded and embedded in Italy and assembled by an Israeli-Italian team at Shalom Tower. The mosaic, in Sharir's unique style, is not chronological but personal, nostalgic and experiential, illustrating a celebration of human urbanity riding the giant wave that expresses everlasting continuity. On the right side of the mosaic he exposes Jaffa, old and new, in the center is the Ahuzat Bayit neighborhood and to the left the modern vibrant Tel Aviv. The motif of scaffolding is repeated throughout the wave, symbolizing Tel Aviv-Jaffa as a vibrant city that is constantly undergoing construction. Some say the wave represents uniformity, others, that it is representative of the city that never stops. 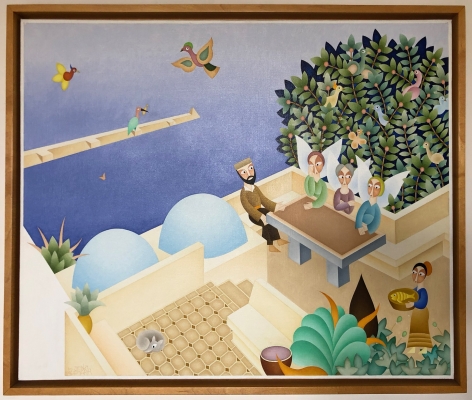 Detail of “Three Angels on the Balcony in Jaffa” — Oil on Canvas, 1996

Captivated by Sharir's mosaic, I was determined to locate the artist. The internet provided information about the galleries where Sharir is represented.

The Pucker Gallery in Boston, Mass has represented David Sharir since 1968, when he was 30 years old. Bernard Pucker generously shared Sharir's email and sent a set of three books of paintings to me: The first, Celebrations-Sacred and Secular (Pucker Safrai Gallery, Boston, Jerusalem 1991) is a retrospective collection of his work, where the viewer shares Sharir's world of whimsical birds, trees, houses, hybrids of flowers and insects, neighbors and family, people playing and orange groves. The second book is "David's Psalms" (Gefen Publishing House, Tel Aviv, 2013). In this stunning book, the public can enjoy the artist's complete collection of interpretive paintings on the psalms. In his distinctive style, Sharir blends conventional meaning and artistic exegesis. His paintings produce fascinating interpretations of the psalm's poignant scenes.The third book, a classic and difficult to find book, is "Jaffa, Belle of the Seas", published by Schocken in a dual Hebrew English edition. is a collaborative masterpiece; a love poem if you will, with selections from the writings of S.Y. Agnon and paintings by David Sharir.

I contacted David Sharir. He was warm and open in our phone conversation and quickly agreed to my request to interview him. In his lovely home in north Tel Aviv, where he has relocated from Jaffa, we spoke for several hours over coffee and cookies, about his art, our mutual experiences in Italy and love of opera. He answered any and all questions, elaborating on his life, his family and work.

David Sharir was born in Tel Aviv in 1938 to Russian immigrants from Bessarabia. His father, a surveyor, took young David with him on some of his assignments. Sharir speculates that he may have acquired his love of design from some of the early memories of his father's drawings and maps.

His parents loved the theater, of which there was very little in the 1940's.Yet, whenever they attended performances, they took David with them (he says there were no babysitters in Tel Aviv at the time). Sharir recalls how he fell asleep on his father's lap but remembers his enchantment with the vividly-colored theater sets. 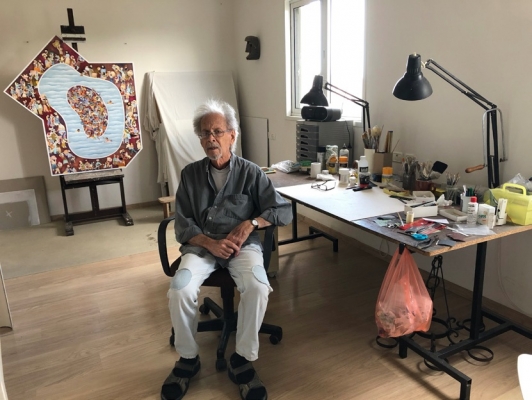 The artist in his studio

Sharir began his study of art in Tel Aviv at the Avni Institute. He continued advanced studies with Aharon Kahana, Yonathan Simon and Yisrael Paldi.

After a solo exhibit in Tel Aviv in 1959, age 21, he furthered his studies in Italy at the Academia delle Belle Arte in Florence from 1959-1961, followed by three years of study from 1961-1964 at the university of Rome from which he graduated with a degree in architecture and set design.

Returning to Israel, Sharir experimented briefly with abstraction. The year 1966 was a benchmark in his life. He married, moved from Tel Aviv to Jaffa and here his hallmark style truly developed.

The strongest element of Sharir's unique style is decorative, reflecting a variety of artistic influences that shaped his life both in Italy and Israel. His work belongs to the tradition of "decorative art" which emphasizes ornamentation and design as a way of expression. Historic influences are prominent: Byzantine mosaics from Ravenna, Italy, Sienese trecento frescoes, Russian folk art transmitted by his parents, Persian miniatures and Hebrew calligraphy. He paints large geometric areas of vibrant colors juxtaposed with intricately patterned scenes detailed with hybrid animals and birds, trees and flowers, filled with stylized bearded men who appear in various poses: bricklayers, tennis players, jugglers, swimmers; people hanging laundry, chatting, angels and on. In the earliest paintings he immortalized Jaffa, the narrow alleyways, his studio, his family, the orange grove and his family.

To write of Sharir only as a painter does not do justice to the artist. He is equally admired and recognized as an imaginative theater set designer. has designed for Israel's most prominent theaters, including Batsheva Dance Company, Inbal, Habima and Cameri. With his designs for "Queen Esther" at the Cameri in 1966, he embarked professionally with his signature style. 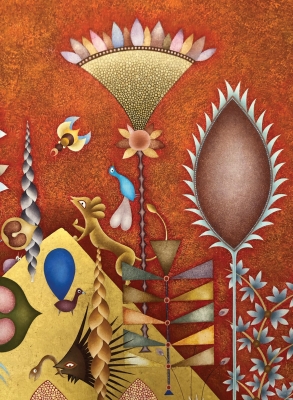 In 1970, his set designs for Habima's Peer Gynt brought Sharir international recognition. He was discovered by Sarah Caldwell, musical director of the young, innovative Boston Opera Company. decade long partnership included set designs for Faust, Hansel and Gretel anda new production of Wagner's The Flying Dutchman. The latter thrilled the audience with Sharir's strongly effective set designs when it was performed by Caldwell and the Boston Opera Company at the Wolf Trap Music Festival in northern Virginia in the summer of 1980.

The dual disciplines of David Sharir have enriched the lives of those of us who are fortunate to be familiar with his work. His art has been presented in solo exhibits as early as 1959 in Tel Aviv and at La Galleria Anthea Rome in 1961, when he was a student at the university.

After uniting with Boston's Pucker Gallery, his work has been continuously given solo exhibits there. His paintings are represented in collections as varied as the Philadelphia Museum of Art, Israel Museum, The Fogg Museum at Harvard University, and the Los Angeles County Museum. 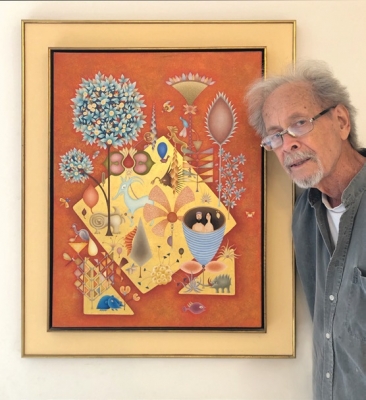 My serendipitous journey through the art world of David Sharir has returned me to my point of origin: Migdal Shalom. The Shalom Tower houses one of Tel Aviv's largest nonprofit art galleries, displaying exhibits by Israel's finest painters, photographers, sculptors and artists. Though the exhibits change over time, two remain permanent: Nahum Gutman's Mosaic wall and David Sharir's Mosaic wall: homage to the city they love. Gutman's wall was designed and installed at the time of the inauguration of Migdal Shalom. Sharir's monumental Mosaic was commissioned in 2002 by Kikar Herzl, Ltd. After he designed the Mosaic, he volunteered as curator for Shalom Tower. Rather than calling himself curator, he prefers to refer to himself as "helper." I help the artists and the Shalom Tower, whose public activities I believe in very much, he says.

Sharir continues to work in his study in north Tel Aviv. As the world is evolving, Sharir's themes are evolving, but always in the style that is unmistakably his.

When we can wander again aimlessly throughout Tel Aviv without mask and gel, I recommend a stop at the gallery of Migdal Shalom. I hope the discovery of David Sharir's Mosaic makes others as glad as it has made me, and leads to further discovery of his unique world.

(There is a documentary film on Sharir by Barak Stav, that was shown at the Jewish Film Festival in Jerusalem at the Jerusalem Cinematheque in 2011. David Sharir - A Retrospective.)