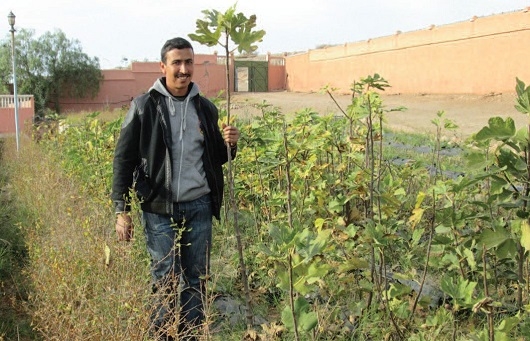 Fig saplings grew two meters in one year at the nursery at Akrich, adjacent to the sacred burial site of the Hebrew saint, Raphael HaCohen

"You could tell when the Jewish boys came into town because they always looked scared."

I choked on my tea as these words were uttered by my Moroccan host father. I couldn't understand how he,as a child, could have thrown stones at the Moroccan Jewish boys as they came into town. He laughed as he told me the story as if it was a favorite childhood memory of his,while I stared dumbfounded at the well-educated businessman, whom I had come to know as a teacher and father. He was quick to mention that it was a different world then and that things have changed with time. However, it struck a chord within me about the deep-rooted prejudice between the two cultures and religions.

I had studied the conflict between Muslims and Jews in school but I didn't realize how much it impacted the people across nations. When you think of the conflict between Israel and Palestine you don't think about the ripple of discord that goes across the entire world. 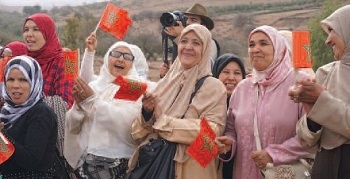 All smiles ... Moroccan women cheering the arrival of guests of different faiths

Morocco is a gateway between Europe and Africa and as a result, different ideas, cultures and languages have greatly influenced the country. The discord that echoes throughout North Africa as a result of extremist groups and governments has so far passed by Morocco, which remains relatively peaceful.

Historically, there was a large Jewish population in Morocco but it has dwindled over the years. As a result, ancient Jewish cemeteries are spread out across the country. Recently, initiatives have been started to recall and advance the unity between the Jewish and Muslim Moroccans. 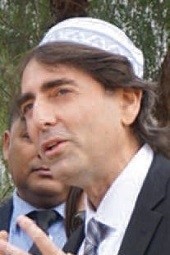 Yossef Ben-Meir and his Moroccan kippa 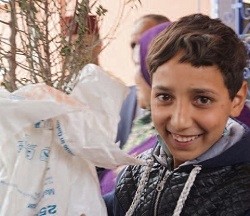 Branching out ... a youth receives organic fruit trees grown at the Akrich nursery

For example, the Marrakech Jewish community has started to work with local Muslim communities to plant trees in the unused arable land connected to these cemeteries. It is as if the past and present are combining to create a better future for Moroccan farming families. An unlikely and unusual project is uniting two religions that in other places are supposed to be at war. Instead of destruction, they are creating life and prosperity.

Right outside of the small village of Akrich, lies the burial site of the 700-year-old Hebrew Rabbi Raphael HaCohen. His shrine is surrounded by graves of other members of the Moroccan Jewish community and around these graves new life grows. Raphael HaCohen became a 'saint' as a result of his healing miracles, and his grave continues to be a place of healing to this day.

This sacred site brings Jewish pilgrims from around the world to Akrich and it fosters the growth of good relations through the High Atlas Foundation's (HAF) interfaith community tree project. HAF is a nonprofit organization based in Marrakech whose main focus is to create sustainable prosperity throughout Morocco. HAF runs projects in tree nurseries, community planning workshops, clean water initiatives, school infrastructure, and in youth and women's empowerment. 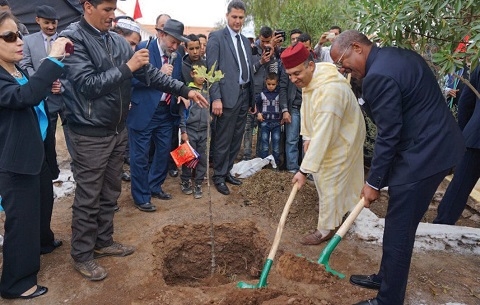 Dig in ... Moroccan governor of the Al Haouz province, Mr. Younes El Bathaoui, and the Ambassador of the U.S. to the Kingdom of Morocco, Dwight Bush Sr planting a tree

It is unusual to hear of projects that are attempting to bridge this tumultuous gap through tree planting, let alone planting trees near Jewish cemeteries. However, the HAF saw the importance of bringing these two communities together. It is a rare situation where a nonprofit is led by an American Jew, Dr. Yossef Ben-Meir, who speaks fluent Moroccan Arabic and is committed to the betterment of Morocco and its peoples, no matter what their religion.

I was raised a Catholic, but while working with HAF, I've been able to have interfaith discussions with both Muslims and Jews inside and outside of work. The opportunity to bridge these gaps myself and then to see this replicated on a larger and more global scale is impressive and revolutionary. This initiative is addressing real religious tensions in a country that has a long tradition and history of Muslim and Jewish inhabitants and solidarity. Even as the population of Jews decreases in Morocco, there will always be a mark left by a people who lived here for 1,000 years through their texts and their left - behind loved ones.

As the tree saplings grow, so does the trust and respect between the rural Muslims and the urbanized Jews. Morocco is attempting to overcome a deep-rooted prejudice that has, and still does, impact people all over the world. Instead of rocks being thrown at each other, trees can be planted together to improve the environment and heal old wounds. Morocco is an example for other areas of the world where Muslims and Jews have lived side by side but in situations can become disparate, and where hope, in more forms than one, awaits to be planted.