Even the sheep are agreed. In summer Iceland is . . . SO GREEN! 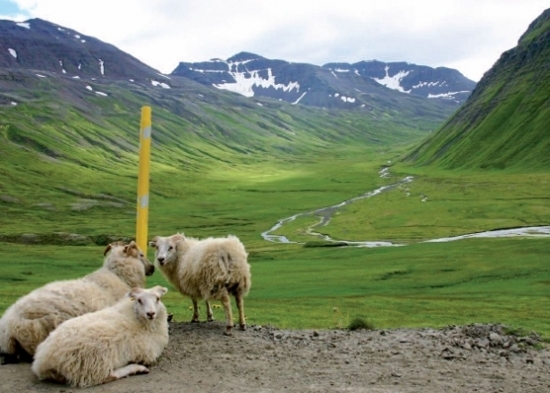 Someone made a mistake. They gave the name "Greenland" to the large island in the North Sea and the name "Iceland" to the island south of it.

It turns out that Iceland is "Green" at least during the summer months and Greenland is cold and icy all year long!

We visited Iceland by boat, amazed at the rolling green fields, flowering shrubs, and thousands of sheep grazing outdoors all summer long. I didn't need the winter clothing we brought from home.

Our first stop was Iceland's largest city - Reykjavik. This is the capital of Iceland and has shopping centers, restaurants, museums and many other attractions. You can take a glacier walk, a whale watch, a visit to the botanical garden, or bathe in one of the many swimming pools throughout the city. Also on my list was a visit to the geothermal energy exhibition to see how they harness the geothermal energy to heat all the houses in the city.

We bathed in the Blue Lagoon. It is located in the lava field landscape on Reykjanes peninsula and is one of the most exotic experiences in Iceland. The waters are of course blue. The entrance to this facility is through beautifully organized locker rooms and shower rooms, with towels, robes - whatever you need - to make your entrance to this warm soaking pool a genuine thrill. You walk into the pool on black sand. The 6 million liters of geothermal seawater in the large lava lagoon is replenished every 40 hours. There is a special place to lather your face with white gloop which is supposed to remove at least ten years of wrinkles from your face. We stood under a foaming waterfall just for fun and then began our walk through the lagoon. We met all kinds of interesting people from around the world as they too uncovered this treasure.

We loved every moment in our Blue Lagoon and found it difficult to leave this paradise, shower and get back on the bus.

There is much more to Reykjavik than the Blue Lagoon. It is the capital of Iceland which is the youngest country is Europe and is its largest fishing port. It is also the center of cultural activities with many museums depicting the art and history of this amazing island. For example, the energy museum opened in 1990. It explains the history of the electrification of the capital and the brilliant idea of using geothermal heat for heating homes. Almost two thirds of the population of Iceland lives in Reykjavik. Lava fields cover 11% of the country, with 4% covered with black sand. We learned that lava fields 7000 years old create the moss and lichen which in turn create the soil.

There are many interesting Viking traditions in Iceland. For example the father's first name becomes the name of the son or daughter and everyone has a different last name. A wife does not take her husband's name. The language is the closest match to the Viking tongue.

Because electricity is so cheap here, there is a huge aluminium smelting company, one of the largest buildings we saw in the city. There is an original shopping market in this charming city using unusual materials like fish leather to create durable, usable products such as boots and purses. Salmon skin has a delicate elegant texture.

The sheep all over Iceland outnumber the people! The wool is warm waterproof and insulating. There are many souvenir shops around the country with hand knitted items made by grandmothers who own and manage the shops. Handmade jewelry, clothes, hats and bags are available in many areas. The designs are original and very lovely. All you need is a barrel of money.

There are many more possible activities in Reykjavik than we had time to do, including whale watching, boat trips, hot springs riding tours, river rafting and glacier hiking.

Isafjordur is the northernmost point we visited in Iceland. It has some of the oldest houses in Iceland. We entered a long 9- kilometer tunnel through a mountain immediately after entering the town which brought us into green fields bordered with small streams. Along the road, we could see wild blue lupin flowers in bloom, similar to those we have here in Israel. We were guided to a charming church. Outside to greet us was a lovely girl who presented us with a program of songs from Iceland as we sat comfortably in her tiny church. We travelled to a gift shop, set with tables and were treated to small finger food as a 10 am treat. The weather was a very comfortable 16 degrees, warm and pleasant. The mild weather, despite the northern location, led to the creation of an agricultural center to teach students to grow fruits and vegetables. We visited a charming garden used to teach agriculture. The entire village is covered with green fields and has many sheep. Red roofed cottages appear now and then, probably inhabited by the owners of all those sheep we saw. The sheep stay outside until the temperature becomes colder and then they are brought into the barns in the fall for sheering. The wool is used in the many beautiful items for sale in the gift shops. 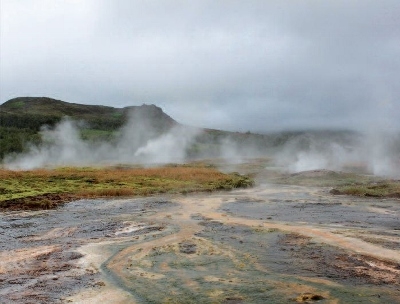 Land of mystery and beauty

Akureyki in northern Iceland is the largest fishing port and a cultural center. It is only 15 miles wide at its mouth but 40 miles from north to south. The setting is starkly beautiful. For over 400 years, it was a trading post and a fishing port. Today, it boasts a freezing plant and the largest shipyard in Iceland. It is only 60 miles from the Arctic Circle but is a center for sophisticated shops and culture and sports. We were amazed at the huge shopping centers, cultural centers for music and art, a museum depicting traditional arts and crafts, sport events and entertainment. It isn't as cold in the winter as you might think. Our visit to a gorgeous botanical garden was a total surprise. This garden was organized by housewives in 1912 who felt their town needed such an undertaking.

They worked for many years to produce a botanical garden called Eyrarlandsvegur which includes 4,000 species of plants, 400 of which are native to Iceland. There is a wide variety of trees, plants and flowers of every kind. It is now owned by the town, which has continued to expand the garden. It includes a lovely restaurant as well. 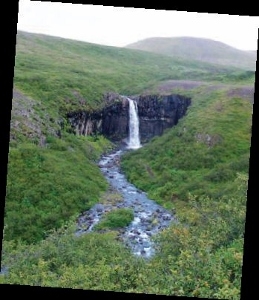 Akureyki even has a college of higher education. It also boasts a municipal swimming pool, golf course, fine restaurants and of course shopping. I fell in love with a hand-knitted sweater called 'Lopapeysa' which will serve me as a coat in our winter weather.

Lake Myvatn was not on our tour but it is highly recommended as one of the most interesting areas in the country. It is 14 sq. miles in extent lying 1000 feet above sea level. The area was formed by lava flows. It is fed by springs on the eastern shore and contains 50 small islands, creeks and bays. Here is Iceland's largest concentration of water birds of many varieties which draw tourists from all over the world. When we were ready for lunch, our hosts recommended rye bread which was buried in hot ground for 24 hours, smoked Myvatn trout and grasamjalk for dessert served with milk and Iceland moss.

We were delighted with all our Iceland adventures and recommend this part of the world for your next vacation.