In the early hours of February 24, 2022, Russia invaded Ukraine. Two days later, Hannah and Uri Finkelberg and Uri's mother Lina Sukernik left their home Kyiv and began their perilous journey to Israel. On March 11, at the home of Grant and Julie Leboff in Raanana where they were staying temporarily after their arrival, they told me their story.

URI: I had been living in Israel for five years and returned to Kyiv during the Covid pandemic to see my mother. The travel restrictions had made it very difficult for me to visit as often as I used to. When I got back to Kyiv I wanted to settle down and get married. I was so happy to find a "shidduch" online via Zoom. After our wedding we stayed in Kyiv: I had my mother and Hannah and my new family – her parents and grandmother - there. I am a web designer and professional photographer. We thought we would stay another year or two in Kyiv before making aliyah.

HANNAH: Uri and I were married on August 15 at the Chabad Lubavitch Jewish Community Center in Kyiv. Rabbi Jonathan Markovitch, the Chief Rabbi of Kyiv, officiated at our chuppah. We had quite a good life in Kyiv in our bubble of family and friends and our very warm community, which was the center of our Jewish religious life. I was head of marketing intelligence in a big Ukrainian company dealing with the import and distribution of foreign brands, including pet nutrition and personal care products. As Uri says, we wanted to make aliyah – but with all the necessary planning; with all our family; selling our apartments; bringing all our things; step by step like regular olim – not as refugees.

At 5am on Thursday, the day the war began, we were woken up by a huge blast. There were rocket attacks, more blasts, bombs and even street fights and we were really scared, really shocked because nobody can imagine this happening in the capital of a big central European country, a city with 5 million people. It is really a big catastrophe. We thought our very central district of Kyiv would be safe. Lina lived nearer to a military site so we felt it would be safer for her to move in with us. We lived 20 minutes from the subway and our block has no underground shelter so we all took cover in the bathroom, which has no windows.

At first we tried to be safe in our apartment. Uri had bought food and water so we could stay indoors, but we soon realized that we had to leave Kyiv.

URI: We were told by the rabbi that we could do anything on Shabbat to save our lives. I called him on that first Shabbat and he told us, "You must leave." In fact, by telling us this so clearly, he saved our lives. We had almost no time to pack. I filled two suitcases with some of our things. I took my tefillin and my camera. We left that evening.

HANNAH: I'm pleased I remembered my contact lenses, but we took very strange things: sugar, salt, eggs, kosher sausages, cutlery - a yoga mat! We thought we might find safety on the way and would need the food. We didn't imagine that we would actually be leaving Ukraine.

URI: We left in a convoy of four cars. The three of us went in our car with a girl the rabbi asked us to take. The rabbi, his wife Inna, their two sons and the family of one of the sons were in another car. The third car contained another Jewish family, and the fourth was driven by a man from special services who led our convoy. We drove at 160 kilometers per hour for 14 hours, mostly through fields and very bumpy back roads, which were empty. All the time we heard bombs and air raid sirens. It was very frightening. On February 27, we crossed the border into Romania. We had left Ukraine.

HANNAH: On Tuesday March 1, we crossed the Romanian border into Hungary. Rabbi Markovitch's daughter, who lives in Raanana, put us in touch with her friend Julie Leboff. We "met" Julie on a WhatsApp call while we were in Budapest and she immediately offered to host us. We eventually boarded an El Al plane from Budapest to Israel. Rabbi Markovitch and his wife helped us even with the plane tickets – the flight was absolutely free for us. We arrived at the Leboffs' house on Friday March 4, twenty minutes before Shabbat. It felt like a complete miracle.

But that wasn't all. When we met Julie's husband, Grant, that first day, I thought he looked familiar. When he said he had been just once to Kyiv, very briefly, to speak at a conference in 2019, I realized that I had been there too! After Shabbat I found some photos I took of the speakers on my phone. It only adds to the sense of miracle and fate about how our lives were saved.

My worst nightmare now is thinking about my parents and my grandmother, who is very disabled. She is bedridden and can't move at all. They live on the 10th floor of a 25-storey building. There are no bomb shelters and they live very far from the central part of Kyiv and far from the subway. I asked them to cover my grandmother with a heavy blanket during bomb attacks so she might be more protected. My parents have only one option: to shelter in the hallway of their apartment where there are no windows.

My parents are very optimistic people. My mother is a maths teacher and every day – even now - she gives lessons to children by Zoom and Skype. We are trying to arrange their evacuation but I don't know how that can happen with my disabled grandmother. The Russians attack humanitarian corridors - even when there are ambulances and buses full of civilians - nobody knows whether people are safer staying where they are, or if they should try to leave. My parents don't know what to do for the best. Thank goodness we are in touch by Whats App. But nobody knows how long there will be internet, electricity, food and water.

Kyiv suburbs have been flattened. Civilian areas with no military infrastructure at all have been attacked. My closest friend, who is nine months pregnant, is in hospital in the center of Kyiv. I'm in touch with her and she tells me that every night there are a lot of rocket attacks and sirens. Even the pregnant women and mothers and their newborn babies from the maternity ward have to go to the bomb shelters.

LINA: I was born in Kyiv. I worked for 40 years as a nursery teacher. I'm retired and I hope that I will learn Hebrew and be able to enjoy my new life here. It is a miracle that we are here safely in Israel.

HANNAH: We are so aware and appreciative of the fact that we are not like the majority of other Ukrainian refugees. Sometimes we cannot quite believe it. We have had the warmest possible support. We've been given clothes, personal care goods and everything we need. The Leboffs have treated us like close family. Their friends and neighbors and all of their community have shown us the most incredible support and love. 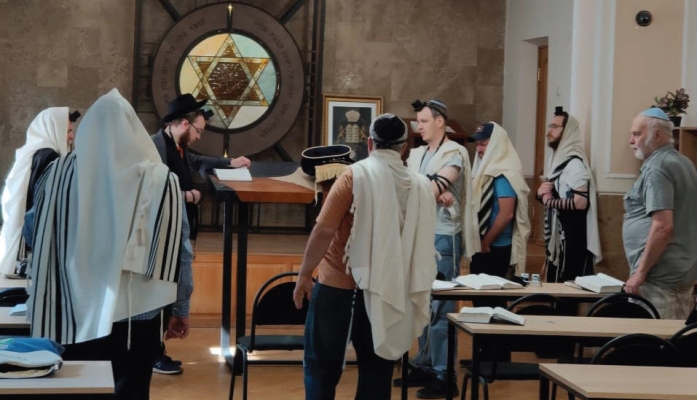 Inside the shul in the Chabad Lubavitch Center in Kyiv

Hannah's parents and her 85-year-old grandmother left Ukraine and reached a large temporary facility with other Ukrainian Jewish refugees in Moldova. Hannah's grandmother was taken on the eight-hour journey from Kyiv to Moldova in a ZAKA ambulance. In the early hours of March 16, they arrived in Israel. 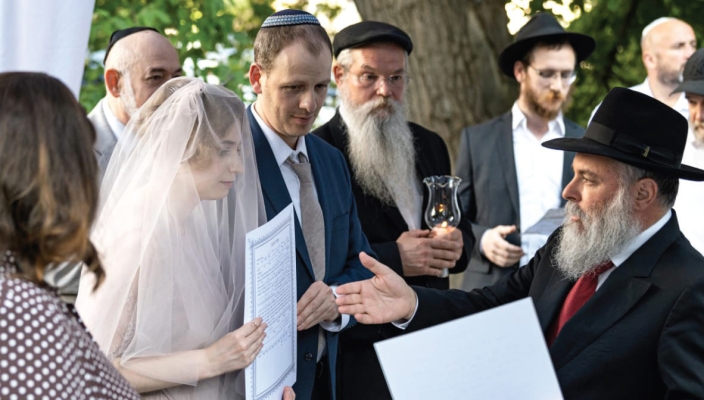 Hannah and Uri under the chuppah at their wedding, August 15, 2021
Tags:
Editor's Choice
PRINT