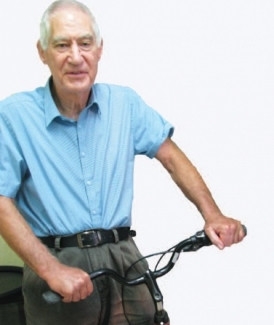 Long before the hatching of the 'greening of Tel Aviv' idea (today green-colored bicycles for hire are scattered all over the city), Professor Emeritus Mike Sever was using a bicycle to travel around the city. Professor Sever, a former New Yorker who settled in Tel Aviv, at first used a car to get around the city.

"It's a lousy idea", he says bluntly. A bicycle, he soon found out, is better. "It's a quick way of getting where you want to go – it's door to door."

Professor Sever keeps two bicycles on the balcony of his home in Sheinkin Street: a large one for travelling around Tel Aviv (he frequently cycles to Tel Aviv University to participate in seminars), and a smaller folding bicycle which he carries with him for inter-city journeys on buses and trains.

Today in his 70s, he cycles every week from the Jerusalem bus station to Givat Ram, where he is working on research projects. He joined the staff of the Hebrew University in 1982.

"Isn't it difficult cycling in Jerusalem?" I ask.

"Not at all," he says. "Getting from the bus station to Givat Ram is easy." He points out that the slope down to the university is a gradual one, and adds, "I have no problem cycling back".

"How about a motorized bicycle"?

"No, I definitely don't want to switch to a motorized cycle," he answers. "Cycling is great exercise, and I'm in good shape. And with a normal bicycle I'm not dependent on gadgets. This means I can fix most of the breakdowns myself. "

A professor of mathematics, he makes a lightning calculation that in the last two years alone he has cycled about 4,000 kilometers.

Not too long ago, Tel Aviv began a process of turning itself into a "green" city. Cycling lanes have appeared, mainly in the center of the city, and would-be cyclists are able to hire bicycles from the ever-increasing bicycle clusters in the city and in such 'youth-related' places as the Yarkon River Park, Tel Aviv University and Kibbutz Seminar in Ramat Aviv. The result is that today there are many more cyclists in Tel Aviv.

"This is progress. More people are getting around as I do," Professor Sever says. "However," he adds, "there are still not enough cycling lanes."

New problems are always springing up. One example he gives is that cars routinely park in the cycling lanes. But he believes that the worst culprits on the road are buses. Some bus drivers "seem to take pleasure" in making life problematic for cyclists.

Another hazard, he points out, is the pedestrian who is so busy on his cell-phone that he doesn't look where he's going. The upshot is that the cyclist has to be "on his toes" in order to prevent collisions.

"All the same," he adds, "the bicycle was the best idea." After more than 10 years on the road, he still enjoys getting around by bicycle in the towns and cities he visits, and especially in Tel Aviv.