While I am by no means adventurous in spirit, there is one major exception. If there's something new in town, some interesting, local innovation that the public is invited to try, I can't pass it up. And if it's free, then all the more. In addition, I was soon to be hosting young grandchildren from the U.S. and was on the lookout for fun activities to do together.

Now the City of Haifa was about to inaugurate a new project, one somewhat doubtful, even ridiculed, overly long in the making, and already affecting the skyline dramatically. In line with Haifa's distinctive Carmelit and Metronit, there was now the latest mode of transport, a system of multiple cable cars known as the Rachbalit which began down below at the traffic hub, Mercazit Hamifratz in the Bay area and ended at Haifa University on top of Mount Carmel.

For several months now, one could see the cars, high in the sky, tracking their way up to the University and travelling down again, passing over the Technion on their way to the bottom. For after serious delays revolving around contractual and financial issues, the Rachbalit, finally completed, was now being tested, its empty cars ascending and descending the mountain.

A chance WhatsApp message informed me that it was about to move on to the next stage and begin a trial run with passengers. Volunteers were invited to sign up. What more did I need?

Buttonholing the friend who had sent me the WhatsApp message, I invited her to join me on a trial trip, and together work out the logistics: time and place of departure, and where to park. Aware of morning traffic jams, we chose the earliest possible time to board, 7am. The station would be Haifa University but where to park remained a problem. Despite vague assurances of parking facilities, I remained skeptical given the University's longstanding policy of disregarding visitors' needs.

Once we'd made our decisions, I proceeded to sign us up, answering the innumerable questions put to potential volunteers. Now all that remained was to await with growing excitement the chosen day and hour.

However, this anticipation was tinged with apprehension. For, meanwhile, there were increasing reports coming out about failure of the Rachbalit to meet all the necessary requirements for safety and preparedness. As a result, the City, it was said, was refusing to issue the company the necessary certification for operating it. Despite this, a phone call to the company assured me that the trial run was proceeding as planned.

In addition to worry about parking and safety, there was also the weather to consider. The month of March had come in "as a lion" and had not yet "gone out as a lamb". Cold, rain and wind were constant. Surely, we weren't going to embark on what was now looming as a possibly unsafe journey, in stormy weather.

At 6:00 A.M. on the designated day, my friend and I conducted a last-minute consultation. On the one hand, I wished to go ahead with the trip; on the other hand, safety, weather and parking issues dampened any remaining enthusiasm. I would let my friend decide. If she objected, that was fine with me; I would be secretly relieved. However, despite the early hour darkness, the cold and the wet, she voted in favor. So, the matter then was settled; we were going.

A half hour later she arrived and the two of us headed for the University. Though it had rained all night, the rain now held off. Hopefully, this was a good sign. After being misled by Waze, and briefly delayed, we used our intuition and approached the university through its main entrance.

From then on, luck was with us. At the barrier, as soon as we said "Rachbalit" the guard (impossibly) waved us through to a parking lot adjacent to the station and completely empty. Minutes later, (without asking for any identification, despite all the questions I had answered when signing up!) the station guard waved us in. I had feared that because of our Waze mishap, we might have to forfeit our turn, but looking around, I saw that no-one else was there. We were the only ones. 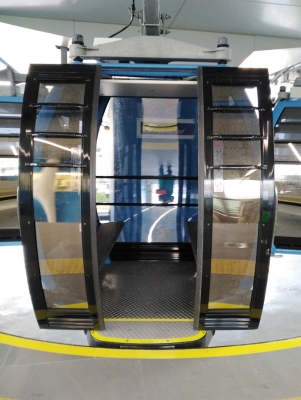 And the cable cars arrived, endlessly one after the other, gently slowing down as they reached the starting point. We slid inside one, having it all to ourselves (with room for 10) and sat back, finally, to enjoy the trip.

The experience of being suspended in the sky, with a birds' eye view, over an urban space so familiar from ground level, was thrilling, the ride gentle and quiet. One was struck by how lovely the city looked, resplendent in the lush green resulting from abundant rainfall. And how dramatic the scenery was with mountain and sea, highlighted by transparent remnants of rain and bursts of sunlight.

Our futuristic looking bubble carried us magically down the mountain. Before we knew it, (19 minutes later) we had arrived at terminus 1. Excited, we disembarked, exited the station and seated ourselves outside on a public bench. The sun was now shining, the sky clear and we enjoyed taking time to reflect on our remarkable voyage and review our photographs.

Luckily, we still had the return trip awaiting us, this time feeling like veteran travelers. Then shortly after 8:00 A.M. we recouped our car (parking lot now filled to capacity) and headed back down the mountain in a more conventional mode. Gratified, and still tingling from our early morning adventure, we felt privileged and proud to have been among the first trying out Haifa's newest contraption. Now, I could vet it and take my grandchildren for a ride. That is, of course, if the City of Haifa agrees to grant the company the permit it needs so badly. 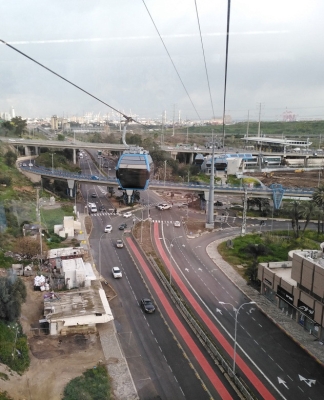 On Apr. 11th, some two weeks after the article was submitted, the cable express received authorization from the City of Haifa and opened to the public