Berlin: a city of contrasts 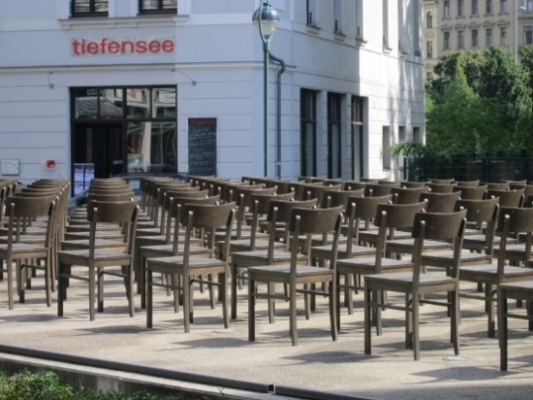 Rows and rows of iron chairs . . . the Leipzig memorial

For a long time I had played with the thought of visiting Berlin, but my feelings were in conflict. I am not a descendant of a Holocaust survivor although a strong connection does exist. I remember so clearly the day the Unterhalter family sat in our lounge in South Africa while my mom read aloud, with tears running down her face, the news that both her sister and her sister-in-law with their seven children had perished in the gas chambers. Her brother and brother-in-law survived four years in that death camp, Auschwitz. Why? Because they were tool and die-makers by profession and as such were needed in the German ammunition war machine.

After a lot of thinking I finally did visit the city that so many people were talking about. I travelled with an organized tour for a period of eight days and seven nights. Our hotel was situated in East Berlin, a little off the beaten track but with a coach on call at all times. It gave us the opportunity to travel and see not only the highly touristic center, but also the outer suburbs of the East and West of this incredible city. One of the opening remarks of our excellent guide was that if you came on this trip for the shopping "you are on the wrong trip". This set the tone for what was an incredible experience.

What were my feelings? For want of a better word: ambivalent! On the one hand you have this modern city rebuilt from the ruins of the bombing – magnificent architecture, mingling with the old, majestic buildings of a previous era. And, on the other hand, you cannot walk two steps without being reminded of the horrors of the Hitler regime and how they tried to annihilate us - the Jews. I realize that the present government is trying to make amends, and of all the countries in Europe that had a hand in persecuting and killing the Jews, at least Germany has accepted responsibility. They have acknowledged their crimes not only against the Jews but also against humanity. The many monuments found all over the city tell the truth about a madman who, for over a decade, influenced Germany and the surrounding countries with his acts of terror. They describe Hitler's rise to power and how he systematically got rid of anyone who did not agree with his policies and could have been a threat to him.

Come together with me on this emotional experience. As we wander along the city streets we cannot but be impressed by the wide boulevards lined with designer stores and pavement cafes. However, as we wander a little further away from this bustle and walk along the cobbled pavements our attention is drawn to the large number of "stumbling stones". Set into the cobblestones are gold-colored squares glinting in the sun, which, on inspection, are seen to be memorial stones commemorating the Jewish families who lived in these buildings before being deported to their death in the concentration camps.

We continue our journey, and standing before us is the gigantic Brandenburg Gate leading onto Unter den Linden, and in my mind's eye I see the masses of people as they listened to Hitler spouting his rhetoric. Then suddenly before me I spy Dunkin' Donuts, and two doors down is the green-striped awning of Starbucks, with people enjoying the sun while drinking their designer coffee. So I am brought back rudely to the present.

That evening after supper, together with our guide, we explore upmarket residential areas. Buildings set among gardens of green, small courtyards, a gentle almost idyllic feeling. Once again a jerk of the senses – on the signboard before us is written, "This was once the center of a Jewish community in Berlin….". In this vein each site gives me this feeling of conflict.

We visited the memorial to the murdered Jews of Europe. As you enter the building you are greeted by silence, in spite of the fact that there are tens of visitors viewing the exhibits. In particular I recall standing in "the room of dimensions", a vast hall where the light is dimmed, and across the floor, lit up, are diary entries, letters and last notes that were written by sons, daughters, husbands and wives during the Holocaust. As I stand there sadness overcomes me, and suddenly I feel my cheeks are wet as the tears fall.

Our two trips out of Berlin were to the city of Leipzig and the notorious Wannsee. From the trip to Leipzig we learned that in 1854 the foundation stone of the Leipzig community synagogue was laid. By 1933 there were about 11,000 Jews living in Leipzig. During the Reichspogromnacht (Kristallnacht) in November 1938 the synagogue and community center were desecrated and destroyed by fire. By April 1945 there was no longer any Jewish community life in Leipzig. On the site of the community center, a memorial has been set up – rows and rows of iron chairs bolted to the foundation, while facing them are the panels of inscriptions describing this community. We sat on these chairs listening to the stories of these Jews, and at the end of the narrative all 38 of us stood up while we sang Hatikvah. We then lit memorial candles - once again a moving experience. 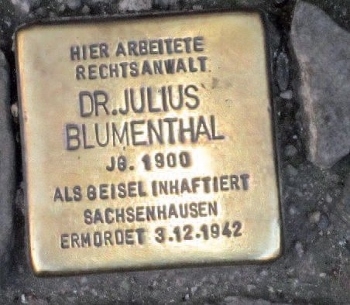 The last memory I would like to share with you is our trip to Wannsee. The first glimpse of this place evokes the reaction: "Oh this looks like a stately home in England", a villa on one side, set in well-kept, beautiful gardens, and on the other, a view looking out onto the river. You enter the building and are met by large, high-ceilinged rooms. The rooms are mostly empty except for the huge posters and pictures lining the walls. These are the walls of death, because it was here in this peaceful setting that it took Hitler and his SS henchmen 39 minutes to finalize their plan for the Final Solution for the Jewish nation. 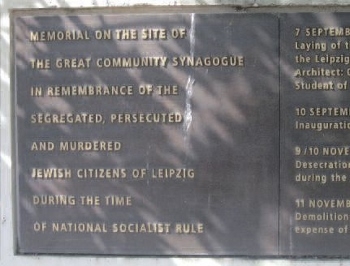 A plaque on Berlin’s main synagogue

Interspersed with these difficult experiences were the sights of a new Berlin hosting outdoor concerts, rebuilding museums, going forward, accepting different cultures and giving honor to the Jews who perished.

I recommend that Jews should go and visit this city and its surrounding areas. It was an experience not to be missed, even if at times I felt that there were two of me simultaneously feeling conflicting emotions.