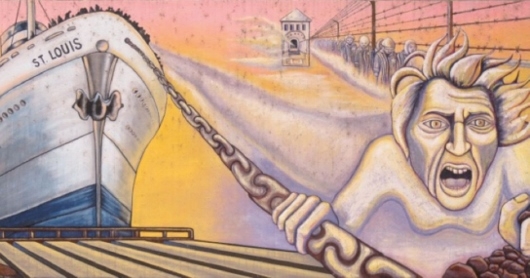 In many conversations with people who have been tourists in the sprawling bumper-to-bumper city of Los Angeles, I have yet to find visitors who have had such a totally off - the - wall history lesson about California as I had during my early morning walks in the neighborhood of Valley Glen.

The Great Wall of Los Angeles Mural is just that – a seemingly never-ending history lesson of vivid, vibrant, joyous events - but also with hauntingly disturbing panels of wars, slaughter, slavery and deathly economic distress. The mural, one of the longest in the world, is spread over almost half a mile of a portion of a 3-meter high concrete retaining wall of the San Fernando Valley Tujunga Flood Control Channel. 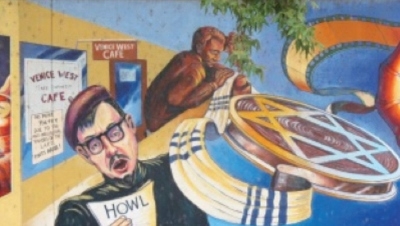 Allen Ginsberg and the Beat generation of the 1950s 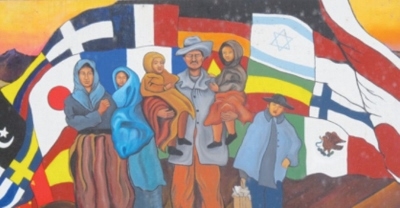 Melting pot . . . migrant California, as shown on the wall 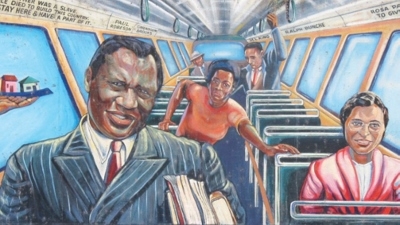 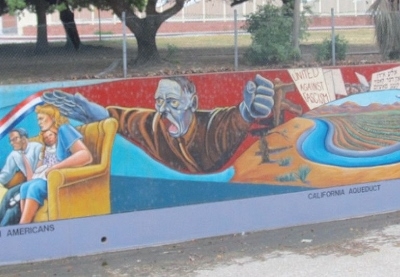 The bad and the good . . . the wall shows a demonized Adolf Hitler 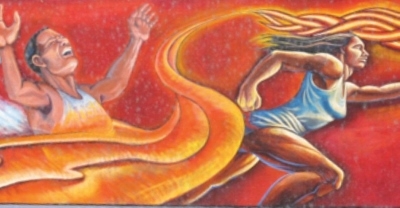 The wide, unattractive concrete - sides and bottom channel pass through the area where I was staying, which has a school, park and sports complex on one side and a busy road and private houses on the other. A sizeable population of American Jews and Israelis live in the area, a fact I realized when taking an early morning Shabbat walk and finding myself going with the flow of Jewish folk on their way to a number of small synagogues in the area.

The mural depicts California from thousands of years B.C.E until 1984. In a series of huge panels, a number of which focus on Jews in America, art from the heart linked to the past deals with many different periods. It includes the massive immigration and settlement in America and the important contribution of those penniless and often sickly people from different continents who played a major role in physically building the country through manual labor in construction and agriculture. Immigrants from many countries also participated and succeeded in the struggle for civil liberties and workers' rights. On some panels there is an emphasis on the Jewish contribution to the world of entertainment, including Hollywood films, the world of music, media, poetry, literature or other arts.

A number of panels focusing on 'Jewish Arts & Sciences' feature, among others, the Jewish poet, Allen Ginsberg, of the Beat generation of the 1950s and the German-born American citizen and Nobel Prize recipient, Albert Einstein. One panel concentrates on the 1950s birth of Rock 'n Roll, with a young guitar-playing Elvis Presley singing and swinging surrounded by a few dozen wide-winged and colorful Cadillac cars. As an unabashed Elvis fan even after all these years, I thought how poignant it was that the one and only Elvis, whose maternal grandmother was apparently Jewish, had been named Elvis Aron. The latter name was later considered by various pundits to have been a misspelling of Aaron, the brother of Moses. Either way, both Elvis and Moses were great movers with an enormous following!

There are panels depicting an American Jewish family hunched around the radio and listening to devastating news about the German advances in World War II from the comfort and security of their living rooms in the USA. A red, white and blue banner passing through the radio itself shows a demonized Adolf Hitler lurking over their heads, arms outstretched as if to snatch them off the couch at any moment.

Another panel shows a sallow - faced Jewish refugee pulling on the anchor chain of the ill-fated ocean liner, St. Louis, packed with Jews in a last - ditch effort to get out of Germany and head for freedom in Cuba. This panel is close to another showing hollow-faced, emaciated Jews sprawled on wooden bunks in the Nazi death camps and then, nearby, the celebration of the American liberation of the concentration camps and a focus on survivors who emigrated to America, the land of the free.

A panel dealing with McCarthyism is an instant reminder of the Hollywood Ten and the large number of Jews who were caught up in the 'Red Scare' of the early 1950s. A figure drawn at the bottom of the panel and dwarfed by a portrait of Senator Joseph McCarthy - the Hollywood sign in the background and a large group of people spilling out of his clenched fist - points an accusing finger at those in McCarthy's grip ; a chilling sight even on a pleasant summer California morn.

During my stay, there was never more than a film of stagnant water covering the bottom of the bleak concrete channel which was far too murky to reflect the hardships and sufferings of those who had been enslaved or physically and mentally abused by others. Nor does it reflect the bottomless pit of resolve and tenacity of those who took leadership roles to fight for the rights of their fellow human beings, as portrayed in this amazing effort to tell it all on the wall. But to achieve just that would take at least another half a dozen miles in addition to this already impressive history of California. 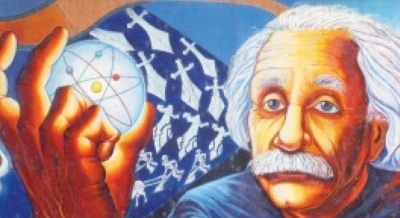 The project began in 1976. There is a sign informing visitors that the Great Wall of LA is a work in progress, a monument to inter-racial harmony created by over 400 youth and their families from diverse cultural, social and economic backgrounds who participated in the project together with a large number of artists, oral historians, ethnologists and scholars. Although no additions have been made in recent years, there is an intention to continue once funds are raised. However, the mural has been lovingly renovated of late, the colors extremely bright, glistening and almost blinding in the sun's reflection.

It was during my walks passing the mural that I began to realize there was a great deal I didn't know about American history. Much of what I did know had come from watching Hollywood films like Gone with the Wind and other great celluloid epics.

Native Indians, Mexicans, African slaves and immigrants pouring in from all over the globe, Japanese being rounded up and put in internment camps during World War II, Vietnam and so much more I did know, but when one sees history laid out in such powerful an artistic sequence as it is on the phenomenal LA wall, the impact is deep and unforgettable. Truly a great success story crammed into half a mile, but there is still many an extra mile to go in order to redraw the lines of acceptable norms of behavior in present-day American society with its poverty, violence and inequality.

Other activists include singer and actor, Paul Robeson; Rosa Parks who refused to give up her seat on an Alabama bus in 1955; Gwendolyn Brooks, the first African-American to win the Pulitzer Prize for Poetry (1950) and the leader of the African-American Civil Rights Movement; Dr. Martin Luther King and Dr Ralph Bunche, who is featured on a roof-strap toward the back of the bus in a panel entitled 'Forebears of Civil Rights' ( presumably meant to be 'Forebearers of Civil Rights' . Dr Bunche was chief aide to UN mediator Count Folke Bernadotte, who was assassinated in Jerusalem by members of the underground Jewish Lehi group. Following the assassination Bunche was appointed to take over the 1949 Armistice Agreement brokered on the island of Rhodes. A descendant of African slaves in America, Bunche was awarded the 1950 Nobel Peace Prize for his brilliant negotiating skills - the first African-American to receive the prestigious award.

In his memoirs the leader of the Israeli delegation, Moshe Dayan, wrote that a good deal of the more than sensitive negotiations with Bunche were conducted over a billiard table whilst the soldier and the diplomat tried to outdo each other shooting pool.

Before the discussions got underway, Bunche decided to have a local artisan create unique ceramic memorial name plates inscribed with the name of every member of the delegations at Rhodes. With the successful signing of the agreement, Bunche presented each one with this somewhat delicate souvenir of their success. At a later stage, Dayan approached Bunche and asked him what he would have done with the nameplates had there not been an agreement.

"I would have broken the plates over your damn heads," was the answer he received from the future Nobel Prize winner.