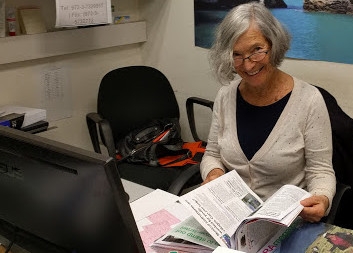 Congratulations to our new chairman, Terry Morris, and to members of our new ESRA Executive. We wish you a successful and enjoyable term of office.

It's been a crazy time trying to get this issue produced. So long, so drawn out. The summer holidays got in the way, and everyone who was anyone vital to getting the basics of the magazine produced was going away at some time. It was like doing a jigsaw puzzle of time slots.

The cherry on the cake was the redundant elections which were falling on our distribution date so we had to reschedule to a day later. Hovering over us on the last week of finalizing the magazine was the demand to leave our mag office as the Kfar Saba municipality needs it back. But it's a good issue with fascinating articles which you will enjoy over the high holidays.

This issue reflects the violence that pervades our cruel world. Our cover story by Anthony Green tells how Lori Kaye, who was murdered shielding her rabbi from bullets in her San Diego synagogue, had made a donation to ESRA just months before when she was visiting Israel.

We feel the anguish of Avi Talala, manager of the community center in Netanya with which we are deeply involved, when he writes of the tragic killing by a policeman of young Solomon Teka and the desperate feelings of the Ethiopian community of being treated as second-class citizens.

Cynthia Barmor reports on a brilliant conference on Israel's struggle to legally fight terrorfare, the assymetrical warfare we are faced with. There's a poignant plea in verse from Shirley Cowan – Stop the killing Now!

Five hundred people attended an ESRA evening with Kay Wilson, who miraculously and courageously survived the brutal attack in the Jerusalem forest where she was walking with her UK friend who was murdered by the terrorists.

Shlomo Liberman tells the fascinating but little-known story of how a Ukranian Jewish poet, Sholem Schwarzbard, deliberately shot Symon Petliura, declaring "I have killed a great assassin" – Petliura was seen as responsible for the atrocities and killings of many tens of thousands of Jews in the Ukraine.

For lighter reading there are some good Jewish tales: J Leonard Romm writes about a true incident he experienced at a Tashlich. Sholom Weinfeld tells how Hasia and Nathan Snipper believed that their marriage, and others, were made in heaven, a belief that permeated through generations of their family.

Carl Hoffman interviews Genie Milgrom, a descendant of the Marranos, who converted to Judaism and wrote a cookbook on the recipes of her 15 Jewish grandmothers. J Leonard Rommtells how his mother believed eggplant was not to be eaten by Jews.

So many remarkable people, with initiative and energy. Glenda and Abel Levitt were honored by the Lithuanian Ambassador for the outstanding work and educational projects they have created in Birzai. Myra Olswang, who too lost family in Birzai in the Holocaust, describes the very moving trip to Birzai organized by the Levitts.

An English theater is to open in its new home in Raanana – Carl Hoffman tells the story of the creation of Center Stage and its creators Daniella and Grant Crankshaw.

Carol Novis writes about Tzvika Graiver and LiAmi Lawrence who founded KeepOlim, a nonprofit organization doing its utmost through innovative and energetic projects to keep olim in Israel. They would welcome your help.

If you hesitate to move into a new career, you will be empowered by how chartered surveyor Laurence Lebor threw himself into playing the guitar and forming his own band.

We all love to travel this beautiful land of ours. Read Lydia Aisenberg on Kangaroo Park and the playground in the Jerusalem Aqueduct. Pat Arthur describes a trip to the Jerusalem Corridor; Frankie Cronin and Joy Kahan elaborate on a three-day trip from the North to the South. Susan Lurie describes a visit to the Agam Museum in Rishon; and Stephen Kliner writes in detail on an outing to learn about the Bedouins, battles and the Bible in the Negev. All were successful ESRA trips. If you are looking for a companion for overseas travel, Lorraine Laby's website will help you find a travel buddy.

Itching to do something worthwhile, to volunteer in a challenging project? ESRA's Tutoring Project is about to start its 2019 – 2020 season, so hurry. To get an idea on how exciting and satisfying it is to tutor Israeli kids, read pieces by tutors Judith Ronat, Shifra Neumann, Bob Bachmann, Saundra Willis, Hazel Michaels and Linda Katzenell who love tutoring.

ESRA's Second Story Bookshop in Zichron has a grand re-opening on September 25 to which you are all invited, and our Raanana Bookshop has moved to a new easily accessible venue. Sidney Cohen reviews Miracle Nation and Richelle Shem-Tov The Girl from Human Street: Ghosts of Memory in a Jewish Family. Almost forgotten author Yud Lamed Peretz found the good in Jews and Eli Libensontells us which are his favorite stories.

For art lovers, the Jerusalem Biennale for Contemporary Jewish Art will enthrall you with over 200 artworks by local and overseas artists. Lynette Karp features artist Marvin Turk with whom you may have studied or whose exhibitions you may have enjoyed.

Some 250,000 Israelis suffer from Parkinson's, a horrendous number. Barbara Grant introduces us to Rock Steady Boxing, a sports treatment gaining popularity in Israel.

Beit Fisher in Raanana served ESRA well for 27 years – activities, courses, lectures, bookstore, booking office, and a drop-in-center. But there is life after Beit Fisher and all our activities now take place in the Golomb Center in Raanana.

Thank you to those readers who sent in New Year greetings, we appreciate it and a happy new year to you all.

Tags:
From Homepage Banner 06 From the Editor
PRINT